Bengali and Rohingya Women Read, Lead and Build Peace Together

Bengali and Rohingya Women Read, Lead and Build Peace Together

“Participation, prevention, and protection,” a chorus of 31 young women learning about the pillars of UN Security Council Resolution 1325 chanted. These young women are Bangladesh’s new members of the Girl Ambassadors for Peace, hailing from Ramu and Ukhiya Upazillas (sub-divisions), Cox’s Bazar.

The Girl Ambassadors for Peace (GA4P) is an initiative of the Global Network of Women Peacebuilders (GNWP) under its Young Women for Peace and Leadership program.  It aims to empower young women and girls in conflict-affected environments and humanitarian situations to be positive role models in peacebuilding and countering violent extremism in Bangladesh, the Democratic Republic of Congo, Indonesia, the Philippines, and South Sudan. NAMA Women Advancement Establishment, a UAE-based organization has partnered with the Global Network of Women Peacebuilders to implement the programme in Indonesia and Bangladesh.

Following focus group discussions and meetings with local authorities, civil society, and the local population in Ukhiya Upazilla and the Chittagong municipality in January 2018, the GNWP team returned to Cox’s Bazar between October 17 – 21, 2018, to facilitate the Training of the Trainors: Girl Ambassadors for Peace with 31 local young women.

The training focused on leadership, peacebuilding, economic empowerment and financial literacy, social media, participatory theater, and literacy and numeracy education. It was conducted in partnership with Jago Nari Unnayon Sangsta (Women Rise Up), a community-based organisation in Cox’s Bazar. The young women drafted business plans for pickle-making, tailoring, and duck-raising; prepared resumes; participated in mock interviews; designed social media campaigns on gender equality; and, outlined strategies to use theatre to promote peacebuilding and open dialogue in their communities. The young women also learned about how to implement UN Security Council Resolutions 1325, 1820, and 2250 on women, peace, and security; and youth, peace, and security in their local communities. 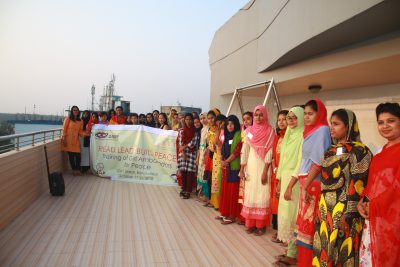 The Girl Ambassadors for Peace members in Bangladesh during the October training.

On November 9, 2018, the Girl Ambassadors for Peace who participated in the Training of Trainors conducted a foundational literacy and numeracy class with 62 Rohingya women in Balukhali Refugee Camp, Ukhiya, Cox’s Bazar. This is the first in a series of literacy and numeracy classes that the GA4P members will teach with Rohingya women and local women in the host community in Ramu Upazilla.

GNWP anticipates that more Rohingya women will enroll in the literacy classes in the coming months since many have expressed interest after they have observed the first classes. About 63 local Bangladeshi women have registered for the literacy and numeracy classes in Ramu Upazilla. The classes will be conducted bi-monthly with women from the Rohingya and host communities. By providing this training, the young women in Bangladesh have taken the first step in empowering themselves and countless women all around them. 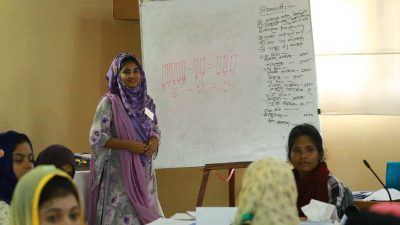 Literacy rates are as low as 26 and 28.8 percent in Ramu and Ukhiya Upazillas according to a January 2018 report from Humanitarian Response. The GA4P members will teach reading and writing in Bangla to women from the local host community in Ramu Upazilla; and English to Rohingya refugees.

Based on a report from UN Women in August 2018 most female refugees – 52 percent of the 1.3 million registered refugees in Bangladesh–were denied formative education. As the Rohingya language does not have its own script, the majority of Rohingya women are illiterate. While there are approximately 1,179 learning centers in the refugee camps across the Cox’s Bazar area, only four percent of young women between the ages of 15 to 18 have access to education, Relief International reported in January 2018, There is also a lack of age-appropriate, gender-sensitive education for female Rohingya refugees. To address this gap, GNWP has developed gender-sensitive and age-appropriate training materials which the GA4P members are using to teach Rohingya women.

From 1978, Bangladesh has been the primary destination for Rohingya asylum-seekers due to its proximity to Myanmar, the Bangladeshi government’s initial recognition of the humanitarian needs of undocumented migrants, and a shared religion. The latest influx of refugees in 2017 brought the total Rohingya population in Bangladesh to 1.3 million.

Tensions between the host population and the Rohingya asylum-seekers have been rising due to competing demands for resources. The long-existing and worsening poverty among the local host community in Cox’s Bazar manifested through under-employment, under-investment, and limited access to education and other social services has been magnified by the influx of the Rohingyas. This has created disparity and resentment between the two communities. Rohingya refugees have also been accused of being used by local criminal groups and drug traffickers in the importation of the drug Ya Ba.

The role of young women in dispelling anti-Rohingya rhetoric and negative perceptions developing within the host community; and promoting harmonious relationships between local Bengalis and Rohingyas is crucial. The new members of the Girl Ambassadors for Peace will work to create positive dialogues between the two communities, beginning with providing basic literacy and numeracy education to Rohingyas and local women from the host community in Cox’s Bazar.  Literacy education is the first step towards empowerment and transformation for young women.

*The author is a Program Officer at GNWP.

Sarah Ibrahim and the Girl Ambassadors for Peace are now on Facebook!

Towards the Localization of Resolution 1325 in Colombia