Today, December 9, 2017, the second anniversary of the UN Security Council Resolution 2250 on Youth, Peace and Security, the Global Network of Women Peacebuilders (GNWP) shares this blog that highlights the organization’s work with young women and adolescent girls in Indonesia under its program Girl Ambassadors for Peace (GA4P). Resolution 2250 emphasizes that today’s generation of youth is the largest the world has ever known and that young people often form the majority of the population of countries affected by armed conflict. The resolution underscores the importance of involving young people on issues of peace and security, especially in conflict-affected countries, where they comprise an even bigger percentage of the population.

“As a young woman, it is important for me to have a voice and I will use my voice to prevent violent extremism and promote peace. Women become victims of violent extremism and radicalism because many people believe that women should rely on men particularly in decision-making,” said Iftitah Nabiilah Ramadhani, during the capacity building training on leadership and peacebuilding for young women and adolescent girls in Lamongan, Indonesia. Iftita is one of the 62 members of the Girl Ambassadors for Peace (GA4P) – Indonesia, a network of young women and adolescent girls who are promoting young women’s leadership and their role in preventing violent extremism and promoting sustainable peace in local communities.

The GA4P program’s implementation in Indonesia and Bangladesh is supported by Nama Women Advancement Establishment, a non-profit women advancement organization based in Sharjah in the United Arab Emirates.

Lillis Badriyah, another GA4P member in Lamongan, emphasized the importance of the social media training: “Nowadays, people have become blind, deaf, and mute because of social media. They only speak in social media; and their only source of news is social media.  What they don’t realize is that not everything in social media is true. News can easily be distorted in social media. Our role as GA4P is to disseminate truthful information and promote peace on social media. We should also use social media to reach out to other young people so that we take action to build peace and prevent violent extremism.”

The entrepreneurship and job skills training is meant to help young women and girls become financially literate and independent. The training on media, social media and theatre skills would help them disseminate peacebuilding messages, challenge the narratives of violence, prevent violent extremism, and engage in discussions on these issues with local populations as well as with local and national authorities. 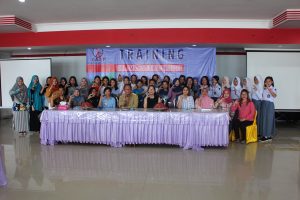 After the intensive capacity building training, GA4P members will travel to rural communities in Indonesia where they will share their skills on leadership, peacebuilding, entrepreneurship and life skills with other young women and girls particularly those who have limited opportunities to go to school or attend similar training.

GA4P members also hold regular conference calls with their counterparts in different countries to share experiences and lessons learned from their training and other activities.

The Girl Ambassadors for Peace is a GNWP programme aimed to highlight young women’s and girls’ leadership potential and their important role in peacebuilding, sustaining peace and preventing violent extremism. It is operational in Indonesia, the Democratic Republic of Congo and South Sudan. Preparations for the GA4P implementation in Bangladesh that focuses on the Rohingya communities is also underway.

Appeal to Honor the Peace Agreement in the Philippines

Summary of the Prelude to the Peace Forum