Ukrainian civil society form Network for the Implementation of Women, Peace, and Security resolutions and CEDAW 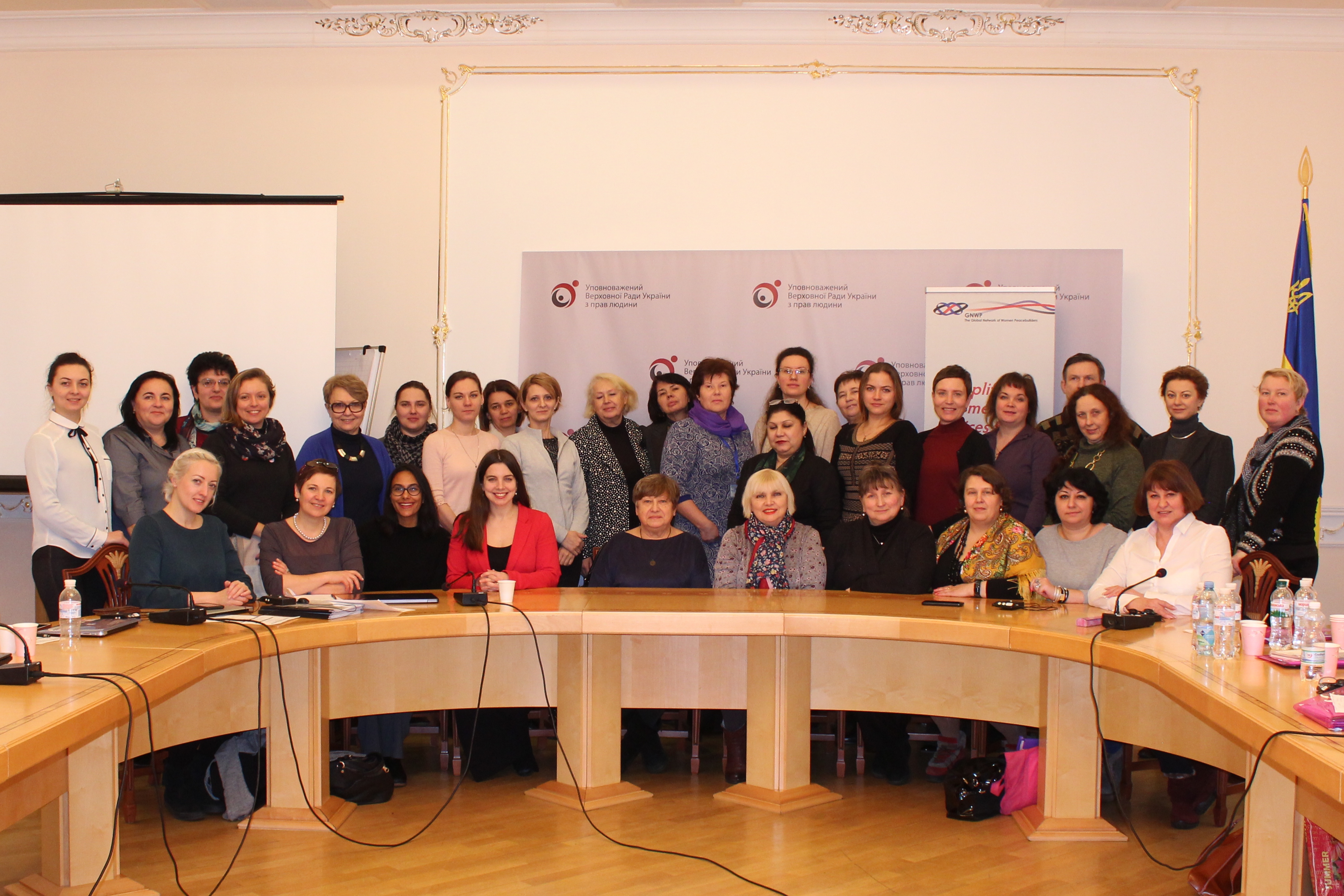 Ukrainian civil society form Network for the Implementation of Women, Peace, and Security resolutions and CEDAW

Applause filled the halls of the Parliamentary High Commissioner for Human Rights in Kiev, Ukraine as Ella Lamakh, the Executive Director of the Democracy Development Center (DDC), inaugurated the Civil Society Network for the Implementation of Women, Peace, and Security (WPS) and CEDAW in Ukraine. This newly formed civil society network will strengthen the coordination of civil society action to implement of UN Security Council Resolution (UNSCR) 1325 on Women, Peace and Security. As part of this effort, the network will coordinate the drafting of joint civil society shadow reports on the Convention on the Elimination of all forms of Discrimination Against Women (CEDAW). This will be produced in parallel with Ukraine State Party report, which will be presented and discussed in Geneva in 2021.

CEDAW and WPS are international policy instruments that are of critical importance to Ukraine. Since February 2014, the country has faced security challenges caused by the unrecognized annexation of the Autonomous Republic of Crimea and the city of Sevastopol by the Russian Federation, as well as the ongoing conflict in the Donbass region, in particular in Donetsk and Luhansk Oblasts. Many of the consequences of the conflict and the annexation, such as the increased prevalence of sexual and gender-based violence, economic instability, political unrest, and insecurity have disproportionately affected women including rural women, women veterans, Roma women, and other minorities. In 2016, over 600 women died in non-conflict related sexual and gender-based violence and 174 who were killed as a result of conflict (UNDP 2016)[1].  Since it began in 2014, the conflict has also increased the number of internally displaced people to 1.7 million; women make up 63 percent of this number (UN Women, 2018)[2].

However, women and other marginalized groups have not been adequately represented in the peace process. This is linked to broader discrimination faced by women in Ukraine, fueled by the rise of “anti-gender” movements, and the government’s failure to ratify the Istanbul Convention. Adopted in 2016, the Ukrainian National Action Plan on UNSCR 1325 (NAP) addresses these issues. But there is a need to strengthen its implementation. As Katerina Levchenko, Government Commissioner for Gender Policy with the Cabinet of Ministers and Ukraine’s NAP holder aptly stated “We have an institutional skeleton. Now we just need to build our muscles.” CEDAW can be a powerful mechanism to strengthen and better monitor the implementation of the NAP.

The Civil Society Network for the implementation of WPS and CEDAW in Ukraine was inaugurated during a training workshop on the synergies between CEDAW and the WPS resolutions conducted by the Global Network of Women Peacebuilders (GNWP) in partnership with the Democracy Development Center (DDC) and with the support of the Swiss Agency for Development and Cooperation. The workshop which aimed to promote synergy between the UNSC Women, Peace, and Security Resolutions and CEDAW, and strengthen accountability for compliance of international law in Ukraine, took place on February 11- 12, 2019 in Kiev, Ukraine. It brought together 28 participants from a diverse range of women-led grassroots organizations working on the WPS agenda across the country.

The workshop featured expert presentations and hands-on exercises. Following a presentation on the core tenets and strengths of CEDAW by Shanthi Dairam, a former CEDAW committee member, the participants analyzed the strengths, weaknesses, opportunities and threats of WPS implementation in Ukraine. The need to improve coordination, especially at the local level, was highlighted as one of the key priorities, alongside providing more adequate services for Roma, IDP and rural women, and improving referral systems for victims of sexual and gender-based violence. Creating the Network to facilitate coordination and information sharing was identified as a way to address these weaknesses.

The Network’s decision to draft joint-civil society CEDAW shadow reports guided by the CEDAW General Recommendation 30 on conflict prevention, conflict and post-conflict situations highlights the importance of the CEDAW as an accountability mechanism. The participants also worked together to identify priority WPS issues that should be highlighted in the civil society shadow report for 2021 including sexual violence against women in grey zones and occupied territories; the social infrastructure and attitudes in the security sector; the rights of IDP and Roma women; psycho-social counselling and support for women veterans, widows, and IDPs; and domestic violence. The workshop participants committed to improve coordination, collaboration, and information-exchange on WPS implementation, thus making an important step towards strengthening accountability for compliance with international law in Ukraine.