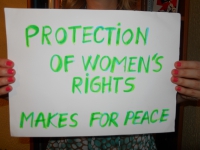 We are happy to announce the 2nd Annual Global Media Campaign “Women Speak Out for Peace” that the Global Network of Women Peacebuilders (GNWP) is organizing to commemorate the International Day of Peace.The campaign begins today, Monday, 15th September 2014, and will last until Sunday, 21st September 2014. The campaign aims to change the dominant image of women in media’s coverage of war and conflict from that of victims, into agents of change, peacebuilders and decision-makers.

The campaign will bring together women and men, girls and boys from around the world, who will raise their voice and speak out for peace. Peace and human rights activists from more than 30 countries will send out messages about women’s role in peacebuilding, reconstruction and nation building on radio and television, newspapers, as well as the social media and mobile technology. They will share their stories of everyday peacebuilding and raise awareness about the UN Security Council Resolutions1325 and 1820 on Women, Peace and Security.

GNWP will complement the Global Media Campaign by sharing the various media messages during the International Day of Peace Symposium on Friday, 19th September at the UN Church Center in New York. In addition, the media messages will be integrated in the discussions during the Symposium and influence the ongoing global policy processes, such as the Post-2015 development agenda, the Beijing +20 Review, the Security Council High Level Review, and the preceding Global Study of 1325 implementation.