We work with Red Nacional de Mujeres in Colombia and Balay Mindanaw Foundation in the Philippines in facilitating virtual and hybrid workshops with local women and youth peacebuilders in these two counties to implement the peace agreements.

In Tolima, Colombia, GNWP carried out the Localization of the peace agreement and the UN Security Council Women, Peace and Security resolutions through a series of community meetings to explain the peace agreement between the Colombian Government and the Fuerzas Armadas Revolucionarias de Colombia (FARC). These community meetings focus on the provisions of the peace agreement that address issues that affect the local communities such as drug trafficking, land ownership, the environmental situation, sexual violence and violations of human rights, and reintegration of former combatants.

In addition to learning more about the peace agreements, local women peacebuilders in Colombia and the Philippines started social enterprises such as communal gardens, rice retailing, and handicrafts production. They operated these social enterprises while holding peace dialogues among themselves. Hence, the social enterprises became their Track 2 peace initiatives.*

The economic initiatives contributed to addressing poverty and food insecurity during the ongoing pandemic. The local women peacebuilders enhanced their skills in project and financial management. The experience in implementing the Track 2 initiatives also enabled the women peacebuilders to reflect on the importance of economic independence. Not only that it enabled them to contribute to addressing poverty, it also boosted their self-esteem, which is an essential element of leadership and decision-making.

*Track II diplomacy or “backchannel diplomacy" is the practice of “non-governmental, informal and unofficial contacts and activities between private citizens or groups of individuals, sometimes called 'non-state actors'." 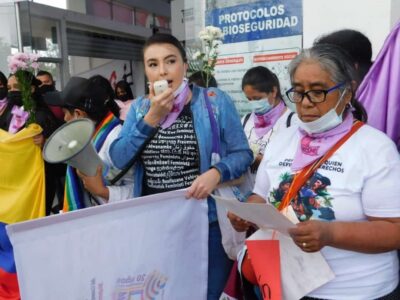 © 2021, women peacebuilders lead a peaceful protest to promote dialogue and call for an end to the violence in Cauca, Colombia