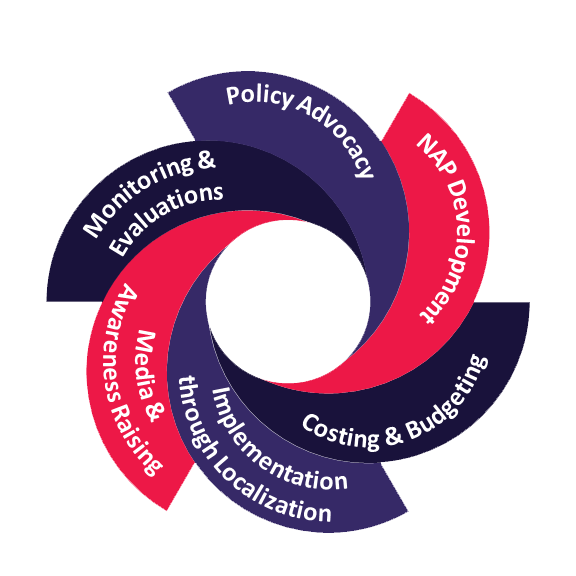 Journalists play a key role in the implementation of policies. They can bring the resolutions to the local communities and provide the people with information to hold governments accountable. They also have the power to change narratives about women’s roles in peace and security, by highlighting their leadership and contributions, instead of portraying them as helpless victims.

However, too often, collaboration with the media is an afterthought in the policy-making and implementation process. Journalists are contacted only at the end of the process, to publish a press release about the adoption of a policy. GNWP helps advocate for the inclusion of journalists and other media actors throughout the development and implementation of national and local action plans on WPS through its Media and WPS Program. We do this through three elements:

GNWP has trained local and national journalists and media practitioners in Armenia, Colombia, the Democratic Republic of Congo, Georgia, Iraq, Kenya, Moldova, Nigeria, the Philippines, and Ukraine on WPS, YPS, and gender-sensitive reporting. As part of the training, the journalists discuss basic concepts of gender equality, learn about the key components of WPS resolutions, analyse the content of major national media through a gender lens, and gain skills to produce more gender-responsive and conflict-sensitive content. This enables journalists to report about the status of implementation of NAPs and help hold governments accountable to their obligations.

In the follow-up to the training, the journalists propose concrete actions necessary to strengthen the role of media in implementing WPS. These actions become a foundation for a Media and WPS strategy. In Iraq, the strategy was developed in cooperation with the Cross-Sectoral Task Force responsible for NAP development, and included as an official annex to the NAP.

Gender-responsive reporting: Improving the narrative of women as helpless victims