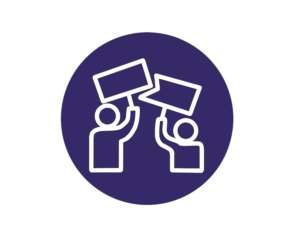 Women contribute to preventing conflict and sustaining peace through:

In Libya, respondents shared: “Women objected to the violence and the proliferation of weapons. They distributed pamphlets, participated in sit-ins, issued statements, and initiated contacts with legislative and executive branches to pressure them to abstain from dragging the country into chaos.”

Similarly, in Sweden, many women-led organizations advocate for the implementation of the Arms Trade Treaty.

In Afghanistan, Afghan’s Women’s Network (AWN) established women’s advocacy coalitions and youth committees in a number of provinces, to call for women’s meaningful participation in the peace process. The coalitions bring together women, men and youth, as well as religious leaders and tribal elders. As Mary Akrami, the Executive Director of AWN noted, “Even when restricted by war and misogyny, Afghan women taken active part in the development of the country. They have stood for elections, led ministries, provided schooling and healthcare, and broken taboos through their art and activism – even when it meant risking their lives.” The women’s movement has also launched an online campaign #AfghanWomenWillNotGoBack to support meaningful inclusion of women in the peace process, which mobilized the support of over 2 million people across the world.

In the Philippines, women conducted a series of consultations with farmers and fisherfolks; with church-goers and many others in local communities to elicit their perspectives on peace. The outcomes of the consultations were then used for advocacy towards the development of a governance framework in designing programs, budget and infrastructure on peace for the provincial government.

Across the countries where the survey was administered, respondents provided examples of women’s civil society organizations liaising with government bodies and international actors to solicit accountability. As Karen Tañada from the Gaston Z. Ortigas Peace Institute in the Philippines said,” I think the best practice is really just the patience to sustain the coalition and dialogue with different groups. It’s not always easy because sometimes you are accused by the government of favouring one side over the other.”