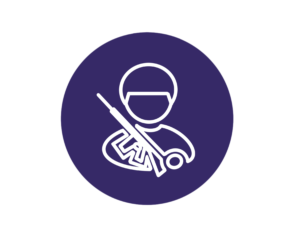 Some governments have taken advantage of the concurrent health, political and economic crises to expand restrictions on human rights and use the pandemic as an excuse to abuse State power. Governments across the world – including in the Philippines, Uganda, Colombia, Iraq, Armenia and South Africa – have employed military and police to enforce quarantine measures in response to COVID-19. This has resulted in the repression of civil liberties and freedoms, as well as increased violence against civilians and peaceful protesters.

In the United States of America, following the killing of George Floyd by police in Minnesota in May 2020, hundreds of thousands of protesters have taken to the streets across the country to protest systemic anti-black racism and police brutality. There have been several cases reported in which police and other security personnel dealt with protesters roughly, crowded them together in close proximity, sprayed them with lung and eye irritants causing them to cough, and cramming them into paddy wagons and jails. These militarized tactics aimed at protesters increase the risk of transmission of COVID-19. In Iraq, the Gulf Centre for Human Rights (GCHR) documented “killings, assassinations, and kidnappings of civil society activists, targeting of peaceful protesters in sit-in squares and attacks on peaceful demonstrations.” In South Africa, women peacebuilders reported many cases of police brutality in enforcing the lockdowns. As a woman activist shared, “The police officers failed us. There was a lot of police brutalities that took place.”