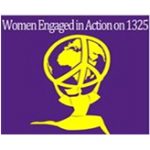 Background: The Women Engaged in Action on 1325 (WE Act 1325) is a national network of women in peace, human rights and women’s organizations who actively collaborated with the government in the formulation of the National Action Plan (NAP) on UN SCR 1325.
Mission: The major objective of the national network is to help the government implement the NAP as well as to concretely bring it to the women most affected by conflict situations in the country.
Programs: The network was launched in Miriam College on November 17, 2010. Since its birth, members of WE Act have been doing their share in implementing the NAP. Since the launch of the NAP in 2010, WE Act 1325 member organizations have been involved in various campaigns and activities. Of the 14 Action Points of the NAP, most initiatives were focused in the areas of policy review, capability building, and training of various stakeholders; engagement with negotiators of on-going peace processes; advocacy to increase women’s participation in peacebuilding in national and local levels; peace education; and media campaigns.
Work was also done in the areas of strengthening the justice system, campaign against small arms, monitoring and documentation of the effects of armed conflict on women, involvement of grassroots women in peacebuilding projects, promotion of civil society involvement in the implementation of the NAP, and monitoring of the Plan’s implementation.