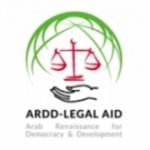 Background: ARDD-Legal Aid was founded in 2008 in response to the Iraqi Refugee crisis in Jordan. The organization quickly realized that the provision of legal services were not enough and began to offer other services and programs targeting all vulnerable people in Jordan with the mission to allow all people to access justice. The organization continues to grow to adequately address the social, political and economic circumstances that contribute to people’s lack of access to justice. As of 2015, ARDD-Legal Aid opened 7 offices across the country in Amman, Zarqa, Irbid, Mafraq, Karak, and the Zaatari and Azraq refugee camps and continues to strive for justice and development through legal empowerment and community empowerment and mobilization.
Mission: ARDD-Legal Aid’s mission is to actively contribute as a civil society organization to a just and stable society, free of inequity and conflict. They empower marginalized groups to acquire and enjoy their universal rights and freedoms by representing their needs and mobilizing relevant duty bearers to conform to human rights, good governance and the rule of law. ARDD-Legal Aid aims to help communities and individuals access justice and enable them to use the law as a mechanism of empowerment, by raising legal awareness among vulnerable communities in Jordan. They fight impunity by seeking remedies and redress for victims and hold offenders accountable through free litigation.
Programs: ARDD-Legal Aid actively works to prevent & respond to violence against women in conflict & post-conflict settings with the protection of women and girls from gender-based violence, particularly rape and other forms of sexual abuse in contexts such as Jordan, a major host country for the Syrian conflict. ARDD-Legal Aid also facilitates access to justice and legal empowerment by providing mediation services and clarifying relevant procedures in the process. The organization’s experienced lawyers provide legal representation for beneficiaries before courts and official departments for different matters at various stages of litigation, including appeals and cessations. ARDD-Legal Aid’s works looks to enhance the capacity of Jordanian civil society to utilize the Women, Peace and Security agenda to develop country-specific strategies for its implementation related to context-based processes. This includes advocating for the reform of discriminatory laws and practices that discourage and inhibit the promotion of advancing security, peace and protection of women and girls in all aspects of the public and private spheres with the idea of translating theory of UNSCR 1325 into practice.
‘Lana’, meaning “Ours” in English, is a regional project implemented in Lebanon, Iraq and Jordan with the main objective being that women and men reject all forms of discrimination that give rise to gender inequality, and assist in contributing to a more equal, violence-free and democratic society in the MENA region. “Ead B’ead”, which means “hand in hand” in English, aims to promote issue-based politics that addresses issues of concern to the community at-large. Empowering Each is a project implemented in Zaatari Refugee Camp working to expand on civic engagement and community mobilization by providing in-depth training to men and women in the UN Women Oasis in Za’atari camp with the objective of empowering them for transformative civic engagement in their communities. There is a specific focus on sexual and gender-based violence (SGBV) prevention workshops with over 200 Syrian refugee men and boys. Women’s Access to Justice phase II builds on 3 years of working to reduce the vulnerability and suffering of disadvantaged women by building on their human capital, facilitating their access to the legal system and securing just outcomes. ARDD-Legal Aid also provides psychosocial and legal support through the use of a unique psycho-legal approach.