Not an afterthought: Integrating a media strategy in Iraq’s 2nd National Action Plan on Resolution 1325

Not an afterthought: Integrating a media strategy in Iraq’s 2nd National Action Plan on Resolution 1325

What is the relationship between journalism, peace, and gender? According to a female journalist working in Erbil in the Kurdistan Region in Iraq, “The role of mass media is to break the traditionally conservative stereotypes around gender in Iraq, but also to report on our government and hold it accountable.” This conversation took place during the workshop on the role of the media in implementing the United Nations Security Council Resolutions (UNSCR) 1325, organized in Erbil on November 15 by GNWP in partnership with Women’s Empowerment Organization (WEO), and with support from Global Affairs Canada. The workshop convened journalists from across Iraq to discuss how media can highlight women’s roles as leaders, peacebuilders and decision-makers; and to draft a comprehensive media and communications strategy for  Iraq’s 2nd National Action Plan (NAP) on the implementation of UNSCR 1325 and its supporting resolutions.

Media reporters who adopt a gender lens become key actors in promoting broad public awareness of WPS, and support and recognition of the role women play in preventing conflict, building and sustaining peace. This is particularly important in a context such as Iraq, where the war with the Islamic State has left a lasting impact on the entire society, including in particular women. However, while there is no better partner than media in advancing the role of women in peace and security, media is often an after-thought in the implementation of WPS. Put simply, media is often not considered a key partner in building and sustaining a gender-sensitive peace. In addition, policy-makers, civil society, and other stakeholders involved in the development and implementation of NAPs often speak in policy jargon, rendering their work “unattractive” to the press. 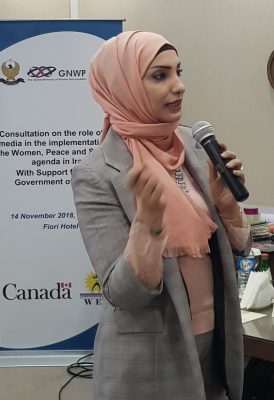 The workshop is part of GNWP’s broader work with media around the world to raise awareness of the WPS resolutions, stimulate debates, and generate public support for implementation. It is a component of GNWP’s “full cycle” approach to NAP implementation, which involves advocacy for the development of NAPs; drafting; costing and budgeting; implementation –especially through Localization; media partnership for broad-base awareness and support; and monitoring and evaluation.

The participants analyzed the media portrayal of women and men living in conflict-affected regions, such as Basra or Mosul; and discussed how to ensure gender-representativeness in reporting.

Through the interactive discussions and hands-on exercises, the journalists drafted a media and communications strategy for the 2nd NAP. They worked hand in hand with representatives of the Cross-Sectoral Task Force (CSTF) on UNSCR 1325, responsible for drafting and implementing the NAP. The members of the CSTF committed to strengthening the coordination with media practitioners. Moreover, they committed to ensuring that rather than being an afterthought, the strategy will be integrated into the plan, and will form its integral

Some of the measures to be included in the media and communications strategy are:

– Train journalists on the NAP, human rights treaties and international documents, such as CEDAW;

– Report on positive stories of peacebuilding;

– Report on local women’s perspectives in conflict-affected cities or communities;

– Conduct more investigative journalism on gender-based violence and other impacts of conflict on women.

GNWP and WEO will work closely with the CSTF 1325 and a local media expert to finalize the strategy and ensure that it is integrated into the NAP.

*The author is a Program Officer at the Global Network of Women Peacebuilders.

FOCUS GROUP DISCUSSION: On the Civil Society Organization (CSO) Survey for the Global Study on Implementation of UNSCR 1325

Reflection on the Localization Program in Sierra Leone

Changing the Narrative: Journalists as Allies for Peace in the Philippines