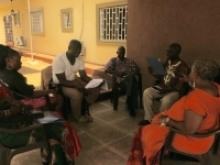 By Mavic Cabrera-Balleza and Lori Perkovich

The CLAPs are the translation of Liberia’s NAP 1325 and are regarded as the critical instruments to effectively address the lingering impact of the war, 13 years after the peace agreement was signed. In harmony with the NAP, the CLAPs are structured around the pillars of women’s participation in decision-making; prevention of all types of violence against women and girls; protection of women and girls from all types of violence including sexual and gender-based violence; and promotion of strategies to ensure that implementation of the CLAPs are fully and sustainably resourced.

Some of the issues prioritized in the CLAPs are: women and girls’ access to education; women’s political participation including representation in local councils; women’s economic empowerment including access to land; and prevention of sexual and gender-based violence including teenage pregnancy.

The writeshop will be followed with a workshop with Superintendents and Development Superintendents from all 15 counties of Liberia. The workshop will enable all other counties to draft their CLAPs. It will also be an opportunity for all Superintendents to meet with the Ministry of Gender, Children and Social Protection and Ministry of Internal Affairs to generate support for the full and effective implementation of the CLAPs.

The CLAPs are also expected to integrate aspects of emergency preparedness and prevention of epidemics such as Ebola. The World Health Organization (WHO) officially declared Liberia Ebola-free in January 2016. Women civil society organizations mobilized and strongly contributed in ending the Ebola crisis.

Liberia is one of the 11 countries where the Localization of UNSCR 1325 and 1820 program is implemented. It is a people-based, bottom-up approach to policymaking whereby local authorities such as superintendents, governors, mayors, local women leaders, community elders, paramount chiefs, religious leaders, teachers and other key local actors integrate women and peace and security commitments in local development planning and local policy implementation.  It guarantees local ownership and participation resulting in positive impacts on the lives of local population.

The Localization writeshop and workshop are jointly facilitated by GNWP and its Liberian member organizations namely Women’s NGO Secretariat of Liberia, Liberia Women Media Action Committee, Mano River Women’s Peace Network, Voice of the Voiceless, Women’s Africa Network for Peace and Women Care in partnership with the Ministry of Internal Affairs and Ministry of Gender, Children and Social Protection. The Localization of UNSCR 1325 and 1820 program in Liberia is supported by the Folke Bernadotte Academy of Sweden.