The Young Women Leaders program consists of 80 young women leaders who have become recognized actors and agents of change in Poso and Lamongan. These young women have advocated to prevent and counter violent extremism. They have worked to better address the root causes of extremism, including gender inequality, through human rights-based approaches. They have led advocacy with national and local government, organized peacebuilding dialogues with community stakeholders, and coordinated economic empowerment initiatives and social media campaigns.

This YWL chapter is committed to supporting local businesses in order to address the root causes of violence. As such, they are working towards building societies that are more gender-equal, peaceful, and resilient to violent extremism. In Poso, the young women partnered with a group of farmers* to help them sell their organic produce. They developed a brand and digital marketing strategy for the produce to improve its reach to target audiences. In Lamongan, the young women have partnered with a woman entrepreneur to produce and market Hijab brooches and jewelry. They are also selling their own products, such as 3D handicraft greetings, hijab bouquets, and banana fritters through their existing communication and digital skills. By supporting local businesses, the YW+PL are economically empowering themselves and their communities.

* Some of the farmers are the parents of the young women leaders which help facilitate collaboration.

YWL members have advocated for greater representation of young women in peacebuilding, political decision-making, and countering violent extremism. At a local level, the YWL members have held intergenerational advocacy meetings with district-level leaders such as the Regent and Vice-Regent of Poso and Lamongan. For example, the young women leaders drafted, distributed, and collected signatures for a statement condemning early, forced, and child marriage. Additionally, the YWL members have organized community workshops on peacebuilding, economic empowerment, and de-radicalization attended by key stakeholders including village heads, local police, youth and religious leaders. In January 2019, through a campaign titled “Peace Goes to School”, the young women leaders in Indonesia visited five local schools where they popularized UNSCR 1325 and 2250 with the objective of encouraging more youth to be educated on the importance of the WPS and YPS agendas.

YWL members in Indonesia are using social media as tool to counter radicalization and recruitment by violent extremist groups. YWL members launched a campaign for safe online spaces for youth activists, particularly young women and girls, using the hashtags #BreakTheCycle and #GirlsSupportingGirls. The campaign, which reached approximately 5000 people, denounced the online and offline harassment and violence that so many young women and girls face as a result of their activism. It also built solidarity amongst young women leaders in Indonesia.

By maintaining a strong social media presence, the YWL – Indonesia continue to encourage their online audiences of the importance of working together to implement the WPS and YPS resolutions. 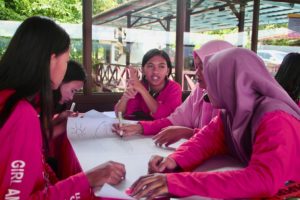 Updates on the Young Women Leaders for Peace in Indonesia

May 1, 2019 ArticlesIndonesiaNewsYoung Women Leaders for Peace
Indonesia’s Girl Ambassadors for Peace empower their communities as they empower themselves May 1, 2019 by Mallika Iyer   “We want our cities to be known for their natural beauty, prosperity and peacefulness — not for the recruitment of violent extremists,” was the resounding message from the members of the Girl Ambassadors ...
Read more

Why must Indonesia’s Youth Vote?

May 22, 2019 GNWP BlogIndonesiaNewsYoung Women Leaders for Peace
May 22, 2019 by Nur Aisyah Maullidah, Girl Ambassador for Peace – Jakarta   In Indonesia, seventeen percent of children live with nutritional problems, while approximately thirty-one thousand high school teens drop out of school every year because of economic barriers. Furthermore, over one hundred thousand children are child laborers. ...
Read more

Learning Together, Inspiring Each Other: Regional Girl Ambassadors for Peace Training in Bangladesh and Indonesia

November 13, 2019 ArticlesIndonesiaNewsYoung Women Leaders for Peace
Learning Together, Inspiring Each Other: Regional Girl Ambassadors for Peace Training in Bangladesh and Indonesia November 13, 2019 by Mallika Iyer   Edited by Mavic Cabrera Balleza “I used to be like the moon, receiving light from only one star. I was focused only on my personal interests and education. After ...
Read more

Charting a Feminist Present and Future: Young Women for Peace and Leadership Program Recognized by the United Nations Secretary-General in Report to Security Council on UNSCR 2250

April 3, 2020 ArticlesBangladeshDemocratic Republic of the CongoEconomic EmpowermentIndonesiaNewsPhilippinesSouth SudanYoung Women Leaders for PeaceYouth Rights
From DRC to Indonesia, from Bangladesh to South Sudan, young women defy gender and age stereotypes and act as leaders, peacebuilders and agents of change in their communities. They are first responders in humanitarian crises, prevent recruitment by violent groups by building a culture of peace, and set up small ...
Read more

April 22, 2020 ArticlesBangladeshCOVID-19Democratic Republic of the CongoIndonesiaPhilippinesSouth SudanYoung Women Leaders for PeaceYouth Rights
Solidarity & Peace Amidst the Pandemic: Young Women Leaders Meet Online for the First-Ever Global Dialogue April 23, 2020 by Heela Yoon and Katrina Leclerc Edited by Mavic Cabrera-Balleza and Agnieszka Fal Dutra-Santos “Afghan women have been fighting for their right to be meaningfully included in the peace process with ...
Read more

July 17, 2020 ArticlesBangladeshCOVID-19Democratic Republic of the CongoIndonesiaPhilippinesSouth SudanYoung Women Leaders for PeaceYouth Rights
Youth Leaders Demand Action: Analysis of the Third UN Security Council Resolution on Youth, Peace and Security July 17, 2020 by Katrina Leclerc “Coming from a community where youth continue to experience violence, discrimination, limited political inclusion, and are at the brink of losing trust in the government systems, the ...
Read more

December 1, 2020 IndonesiaPreventing Violent ExtremismYoung Women Leaders for Peace
December 1, 2020 by Mallika Iyer and Heela Yoon “I started advocating for peace and gender equality at the local mosque near my house, where I teach young women how to read the Quran. But I now I want to deepen my knowledge and work with other peacebuilders across my ...
Read more
﻿