A Sierra Leonean Named to Sexual Violence in Conflict Post 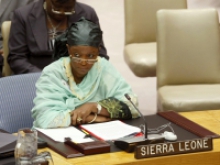 SIERRA LEONE, July 30, 2013— Zainab Hawa Bangura, the minister of health and sanitation in Sierra Leone, a country that not long ago rose from a brutal civil war, will take over in September as the United Nations special representative on sexual violence in conflict. Bangura, 52, who replaces Margot Wallstrom, 57, of Sweden, has also been the country’s minister of foreign affairs and international cooperation and a chief adviser and spokeswoman for the president on international issues.