The Global Network of Women Peacebuilders (GNWP) is proud to introduce Nyuon Susan Sebit, the third recipient of the Cora Weiss Fellowship for Young Women Peacebuilders. The Cora Weiss Fellowship was established in 2016 to honor long-time women, peace and security champion, Ms. Cora Weiss. Through this fellowship, young women have the opportunity to join the GNWP International Coordinating Team for one year where they work to promote effective implementation of the UN Security Council Resolutions 1325 and 2250, and the supporting resolutions on women, peace, and security; and youth, peace and security, particularly at the national and local levels. Cora Weiss Fellows also participate in the implementation and coordination of the Young Women for Peace and Leadership Program (also known as Girl Ambassadors for Peace), which aims to build the capacities of young women in conflict-affected areas or in humanitarian situations with a specific focus on leadership, literacy, peacebuilding, preventing violent extremism, and economic empowerment.

As a human rights lawyer from Juba, South Sudan, Susan brings to GNWP her experience in advocating for women’s access to justice in East Africa. She is also the co-founder and Executive Director for the National Alliance for Women Lawyers where she worked towards ending violence against women and implementing the women, peace, and security agenda in South Sudan. An active member of her community, Susan served as a legal advisor to the African Union Youth Parliament; Christian Lawyers of South Sudan; and the Legacy for African Women and Children. She hopes to use the knowledge she gains and the networks she establishes from the fellowship to improve women’s participation in all aspects of leadership during conflict and post-conflict recovery in South Sudan.

The Cora Weiss Fellowship for Young Women Peacebuilders provides opportunities for young women leaders who share Cora Weiss’ vision for sustainable peace and gender equality as strong and integral parts of the global culture. Ms. Weiss is a strong supporter of the United Nations, an early member of Women Strike for Peace (WSP), serving on its national board from 1961-1973. She was a leader in the anti-Vietnam war movement in the United States and was the co-chair and director of the Committee of Liaison (COL) with Families of Servicemen Detained in North Vietnam from 1969-1972. As part of this group, Ms. Weiss organized the exchange of mail between Prisoners of War (POW) in Vietnam and their families where she and the COL arranged for the return of some POWs. She is the president of the Hague Appeal for Peace and was the president of the International Peace Bureau from 2000-2006. Ms. Weiss was one of the civil society drafters of the ground-breaking UNSCR 1325. 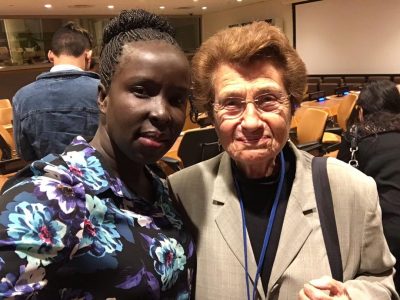 Pictured: Susan and Ms. Cora Weiss at the United Nations Headquarters on October 24, 2018.

Inspired by Ms. Weiss’ achievements, Susan, like the past two fellows from Nepal and Nigeria, joins GNWP’s International Coordinating Team to fulfill its mission to empower women and amplify their voices to build sustainable and inclusive peace.

Youth Participation at CSW60: Good Initiatives But More is Needed

We are all a piece of peace: Young women leaders call for greater inclusivity for sustainable peace