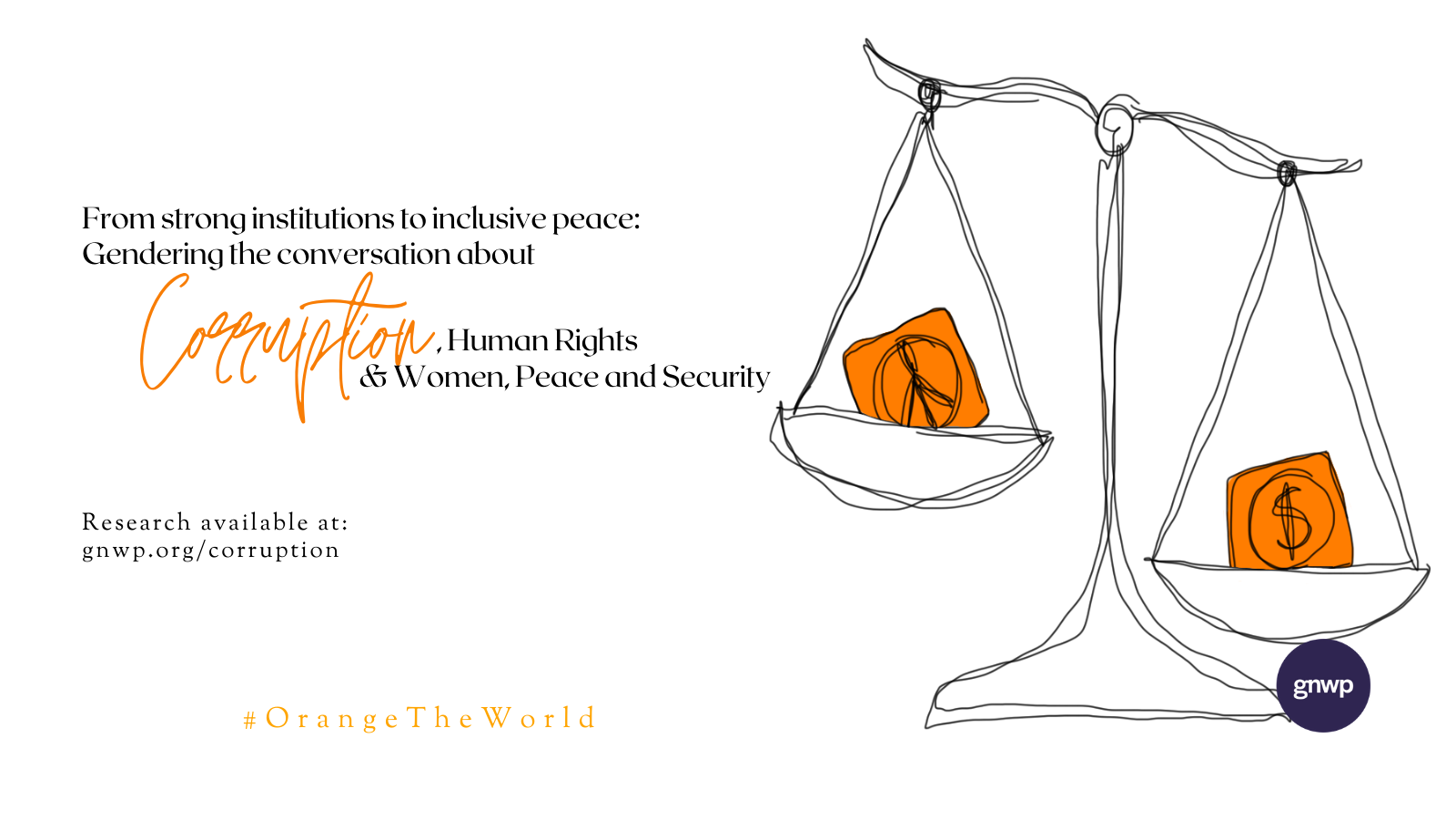 “The most important characteristic of a peaceful society is a set of institutions that enable its members to live together in peace. This entails an absence of high levels of corruption and the existence of the rule of law. Strong institutions promote the peaceful co-existence of individuals and groups with differing interests and values and are a necessary condition for human flourishing.”

This is how one of the participants of the Global Network of Women Peacebuilders’ (GNWP) research on local women and civil society’s perspectives on sustaining peace defined a peaceful society. The research reached over 1,600 women and men in 50 countries. When asked what peace means to them, the largest number – 40% of all respondents – indicated good governance and strong institutions. In line with this, corruption – within governments, civil society, and even donor institutions – was listed as one of the persistent challenges to sustainable and inclusive peace. 10% of all respondents believed that corruption is the biggest obstacle to peace. Respondents pointed out that corruption prevents grassroots peacebuilders from accessing funding to support their work, breeds distrust between citizens and their government, fuels economic inequality, and aggravates grievances. All of these factors are also the root causes of conflict and violence.

Corruption is a security concern

The findings of our research have added to the growing literature and policy discussions on the impacts of corruption on peace and security. A 2015 study by the Institute for Economics & Peace revealed that “corruption has a major influence over decreased levels of peace, including violent crime and the homicide rate.” In a similar vein, an analysis by Transparency International showed that “11 of the 20 most corrupt countries have been affected by violent conflict, often lasting many years.” As noted above, corruption aggravates the root causes of conflict. At the same time, armed conflict creates a fertile ground for corruption – as the influx of outside funds in post-conflict countries provides incentives for officials to make corrupt deals for personal gain.

The interlinkages between corruption and peace have also been recognized in global policy discussions. Recognizing the link between corruption and peace and security, the United Nations Security Council (UNSC) held a briefing on corruption and conflict in September 2018. The UNSC has also addressed corruption in country-specific discussions and briefings. Misappropriation of financial resources is one of the criteria for sanctions in the cases of Somalia and Libya. Corruption has also been tackled in discussions around the Sustainable Development Goals (SDG). While preventing and combatting corruption is not a stand-alone SDG, tackling corruption, bribery, and money laundering, as well as recovering stolen assets, are specific targets under SDG 16 on Peace, Justice, and Strong Institutions.

Where are the women? Bringing a gender lens to policy discussions on corruption

Despite the strong linkages between corruption and peace, most research, analysis, and policy discussions on corruption remain gender-blind and leaves the myriad of ways in which corruption affects women and men in conflict-affected situations unexplored. There is evidence that women and men are affected differently by corruption: corruption affects women’s access to literacy education, as well as their access to health, including maternal health, education, and economic opportunities. Still, analyses of the gendered impacts of corruption is not systematic in the literature on the issue, or in the policy discussions and recommendations related to corruption.

To address this gap, the Global Network of Women Peacebuilders (GNWP), with support from the Directorate of International Law of the Federal Department of Foreign Affairs of Switzerland, conducted research which applied a gender lens and conflict lens to the impact of corruption on peace and security, and on human rights. We used in-depth analysis of existing literature, policy documents, and ongoing global policy debates on corruption to map out existing trends and identify some good practices. Additionally, we conducted key informant interviews and focus group discussions in Nepal and Nigeria. Using the Women, Peace and Security (WPS) agenda as a framework, the research highlights the interlinkages between corruption’s impact on human rights, peace, and gender equality, including women’s effective participation. The findings of the research are detailed in a policy brief and two in-depth case studies from Nepal and Nigeria. While not surprising, they serve as a critical wake-up call.

We found that corruption affects the implementation of all four pillars of WPS, and thus is a threat to both human rights, and to sustainable and gender-equal peace:

1. Corruption’s well-documented negative impact on human rights and women’s rights undermines the implementation of the Protection pillar of the WPS agenda. In North-East Nigeria, wide-spread corruption in internally displaced persons’ (IDP) camps has increased the prevalence of sexual and gender-based violence (SGBV), and contributed to impunity for SGBV perpetrated by armed actors. Research respondents noted that corruption facilitates the spread of forced prostitution and human trafficking, as corrupt officials allow influential persons to “take girls outside the camp in the pretext of giving them better education but most often exploiting them either as sex workers or house helps, sometimes trafficking them to other states or communities.” Respondents also noted that there have been cases of police officers demanding payment from SGBV victims before filing their reports.

2. Corruption is a security concern, and a key factor undermining the implementation of the WPS Prevention pillar, as it can trigger conflict and aggravate existing insecurities, particularly for vulnerable groups, including women. The Committee on the Elimination of All Forms of Discrimination Against Women (CEDAW Committee) has noted the link between corruption and women’s personal security. For example, in its Concluding Observations to Ukraine from 2017, the Committee notes that the continued hostility and impunity for violations especially in Eastern Ukraine “along with pervasive corruption, has contributed to an increase in the level of violence against women by State and non-State actors and to the reinforcement of traditional and patriarchal attitudes that limit women’s and girls’ enjoyment of their rights”. However, corruption is also a threat to international peace and security. The UNDP report “Journey to Extremism in Africa” shows that the groups most susceptible to recruitment are characterized by significantly limited confidence in government and a sense of grievance towards the State. The belief that the government only looks after the interests of a few, the level of trust in authorities, and the willingness to report experiences of bribe paying were all key indicators in analyzing the susceptibility of young people to voluntarily joining a violent extremist group.

4. Corruption has a documented negative impact on women’s access to justice, which undermines the post-conflict transition to a peaceful society and the implementation of the WPS Relief and Recovery pillar. In Nepal, research respondents noted that the police and judiciary officials are often hostile or disrespectful towards women, and there is a lack of understanding and appropriate guidelines on how violations of women’s human rights, including SGBV, are to be addressed. The lack of effective transparency and accountability mechanisms perpetuates such gender inequalities, as there are no checks and balances that would prevent security and justice officials from bringing their own biases into the system. Respondents also stated that widespread corruption at police and courts prevents speedy case clearance. As one respondent stated, “If there is ‘khuwai piyai’ (term used to indicate bribes provided – in cash or in kind – to obtain favors) then work moves ahead, otherwise it does not.” As a result, it could take up to 5-6 years for a case of SGBV to be considered in court. This effectively prevents women from accessing justice, as they do not have the resources to pay the bribes or to cover the legal fees during such a lengthy period.

Corruption is therefore not only a security concern – it is a WPS concern. Yet, it remains largely absent from discussions on conflict prevention and peace and security, including in the framework of WPS. Our call is clear: conflict-sensitive gender analysis must be a part of all discussions, policies, and actions to curtail corruption. Likewise, the issue of corruption should be acknowledged and discussed in policy fora dedicated to gender equality and sustainable peace – be it within the UN Security Council, the CEDAW Committee, or in national parliaments.