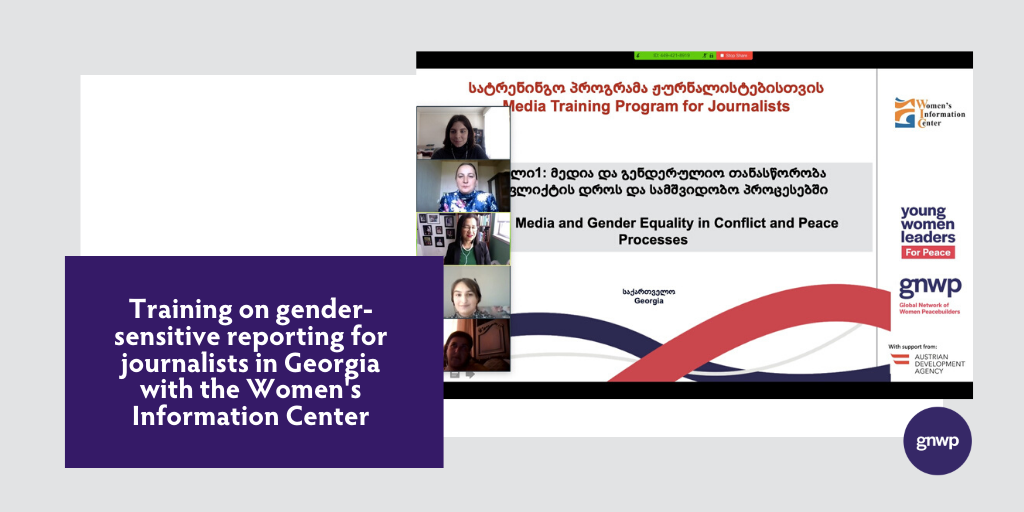 “Resolution 1325 is one of the most important international laws we have. It guarantees women’s participation in peace processes and decision-making. But in Georgia, women do not participate in the peace negotiation and important discussions, because they don’t have the information on how to get involved. In conflict areas, television is the main source of information for women, but it does not speak about peace, or about the importance of women’s participation. It’s the journalists’ role to change this!”

This is how Ms.Lela Akiashvili, the Prime Minister’s Advisor on Human Rights and Gender Equality in Georgia, addressed the participants of a four-part online training on Women and Peace and Security (WPS) for Georgian media representatives, organized by the Global Network of Women Peacebuilders (GNWP) and Women’s Information Center (WIC), with support from the Austrian Development Agency (ADA) between May 20th and June 11th, 2020.

The government of Georgia adopted its third National Action Plan (NAP) for the implementation of UN Security Council’s Resolution (UNSCR) 1325 on WPS in 2018, for the period 2018-2020. Thanks to the advocacy by civil society organizations – including GNWP’s partners, WIC and IDP Women’s Association “Consent” – the latest NAP includes a stronger focus on human security, participation of vulnerable groups, such as internally displaced women, and conflict prevention, including through using early warning systems. However, grassroots organizations and local populations in Georgia have very little or no knowledge about the NAP and UNSCR 1325. As a result, this transformative policy may not be effectively implemented.

Journalists play a key role in the implementation of policies. They can bring the resolutions to the local communities and provide the people with information to hold governments accountable. They also have the power to change narratives about women’s roles in peace and security, by highlighting their leadership and contributions, instead of portraying them as helpless victims. However, in practice, this role often remains unfulfilled. According to the Global Media Monitoring report, in 2015, only 24% of the people heard or read about in print, radio and television news are female, and most stories about peace (64%) reinforced gender stereotypes. GNWP’s work with media representatives in Armenia, Colombia, the Democratic Republic of the Congo (DRC), Georgia, Moldova, Nigeria, the Philippines and Ukraine confirms this. For example, in Ukraine, textual analysis of leading national newspapers conducted by the journalists has shown that women are portrayed as sex objects and incapable of taking decision-making positions. In Nigeria, the journalists found that only between 5 and 10 per cent of stories in major dailies featured women. Therefore, in order to effectively tap into the power of the media to advance the women and peace and security agenda, their own awareness and appreciation of this agenda must also be enhanced. This is the primary reason why GNWP developed its Media and WPS program.

In Georgia, many journalists – especially at the local level – are not aware of the WPS resolutions or women’s roles in building sustainable peace, and often view women as weak and powerless. As part of its effort to support implementation of WPS and meaningful participation of women in peace processes in Georgia, GNWP and WIC organized a series of online media trainings on “Media and Gender Equality in Conflict and Peace Process”. The aim of the training was to increase the awareness of Georgian journalists about their roles in supporting gender equality, women’s meaningful participation, the implementation of Georgia’s NAP on UNSCR 1325, and in promoting gender- and conflict-sensitive responses to the COVID-19 pandemic.

The training came at a critical time. The COVID-19 pandemic has caused delays and suspension of work for many civil society organizations. Moreover, the wide-reaching socio-economic and peace and security impacts of the pandemic make the role of the media more crucial than ever. To address the “pandemic of disinformation,” GNWP and WIC with the support of ADA have decided to hold the media training virtually.

As a result, the training took place as a series of four interactive online discussions. During the first online workshop, the participants learned and discussed the basic concepts of gender equality and reflected on the different needs of women and girls in time of conflict and crises. The journalists conducted a gender-sensitive analysis of the content of local and national newspapers to better understand how women are portrayed in the media and how these representations are different from the representation of men. During the second workshop, the participants deepened their knowledge of UNSCR 1325 and other resolutions on WPS. They also heard from Lela Akiashvil – the Prime Minister’s Advisor on Human Rights and Gender Equality in Georgia – about the national and local policies and activities implemented in the country to achieve the objectives of the resolutions. During the third workshop, the participants engaged in an interactive discussion about women’s roles in the Georgian peace process. They learned about the structure and modality of the ongoing peace negotiation and listened to experiences of women from areas bordering the breakaway regions of Abkhazia and South Ossetia. During the fourth training, the participants analyzed the specific needs of women and girls in the context of COVID-19 pandemic and what is required for a gender-responsive and conflict-sensitive COVID-19 response.  They also examined  how Georgian women – including women peacebuilders – are responding to the COVID-19 crisis. The participants emphasized the importance of implementing the WPS agenda during the pandemic as this can contribute in addressing gender inequalities and prevention of violence.

The workshops equipped the journalists with knowledge and skills necessary to produce gender- and conflict-sensitive reports on COVID-19 and on peace and security. As a result of the intensive training course, the journalists committed to practice more gender-sensitive and conflict-sensitive reporting. As one of the participants Nina stated, “As journalists, we should focus more on the needs of women and girls during the pandemic, share stories of female doctors and healthcare workers, and highlight their achievements and challenges.” Another participant, Nuka, said “Media is not only a source of information. It shapes norms and attitudes.”

During the last training, the National Media and WPS Prize in Georgia was launched. The journalists have a month to submit articles, audio and video materials that cover peace and security or COVID-19 issues from a gender- and conflict-sensitive perspectives. Stay tuned for GNWP’s announcement of the winning journalists and their entries!