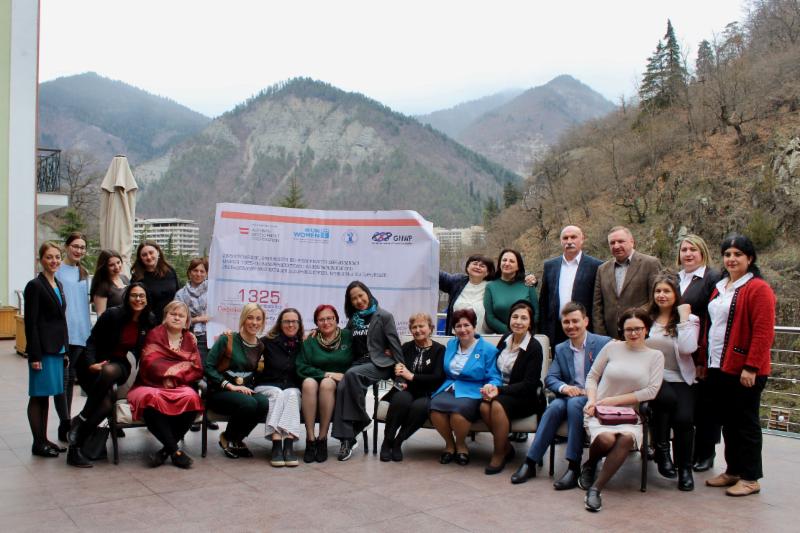 “Our conflicts are not frozen!” – civil society, national and local authorities from Armenia, Azerbaijan, Georgia, Moldova and Ukraine discuss conflict prevention and Localization of UNSCR 1325 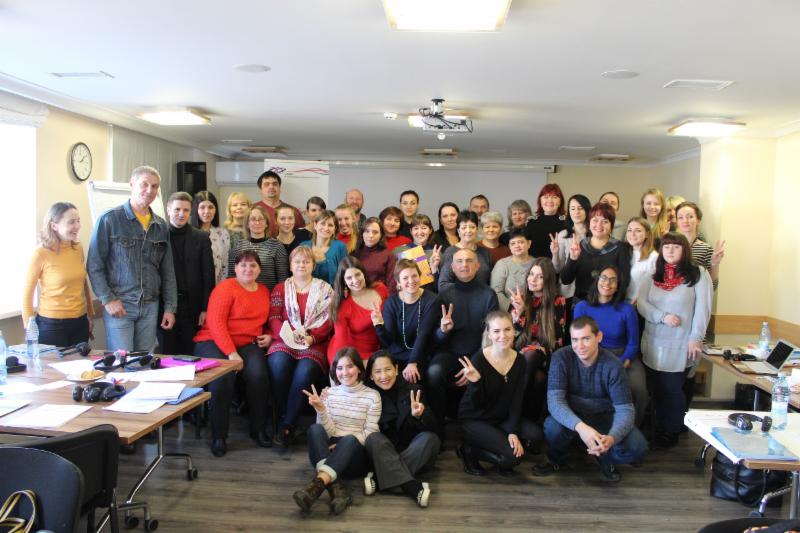 “Women are our everything” – implementing UNSCR 1325 in Kherson, Ukraine 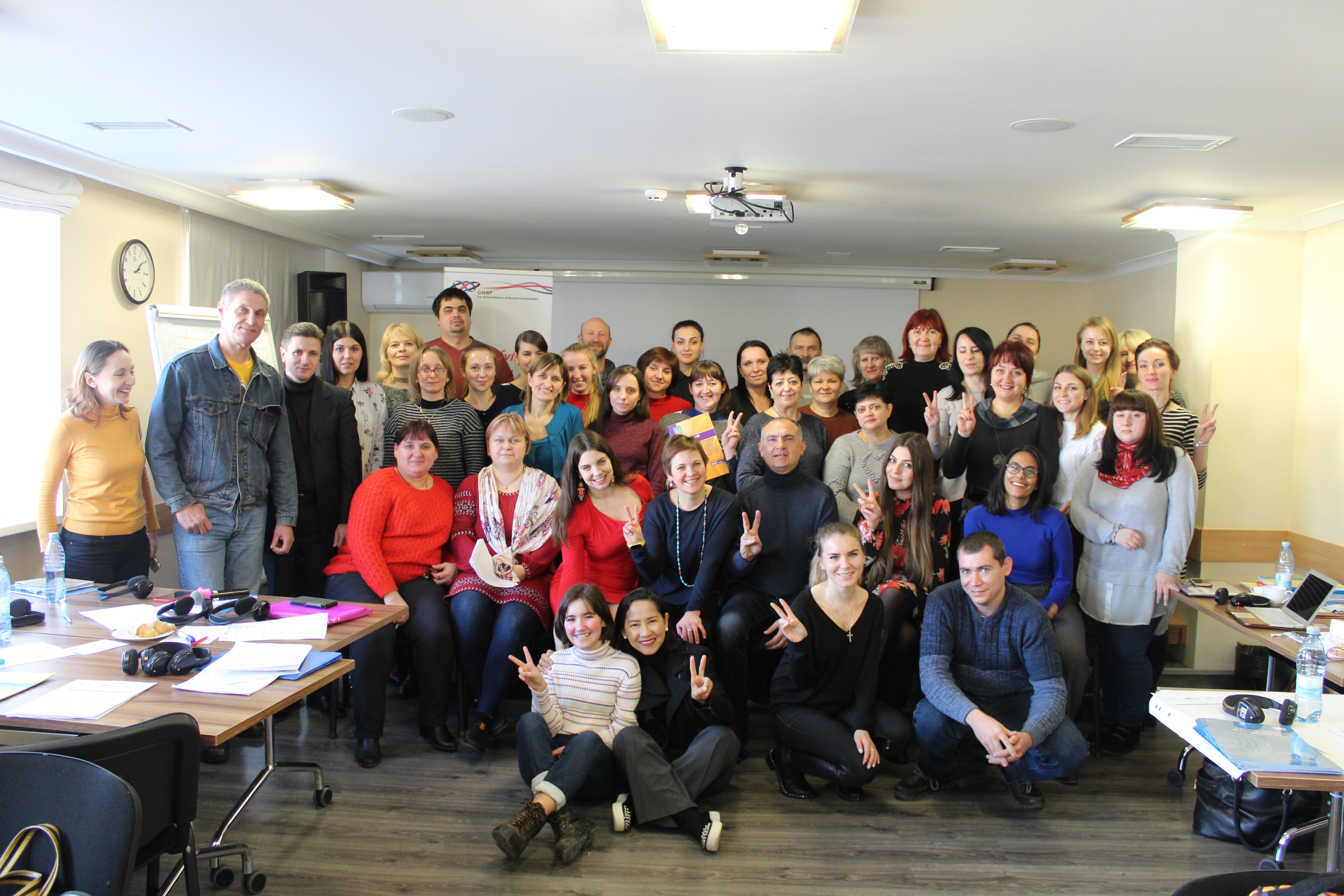 “Women are our everything” – implementing UNSCR 1325 in Kherson, Ukraine

Sharing the border with Crimea, as well as with Zaporizhia – one of the oblasts affected by the violence in Eastern Ukraine – Kherson, an oblast in southern Ukraine has faced multiple security challenges. These include high numbers of internally displaced persons, and the need to provide adequate services for veterans returning from the frontline, and their families. Women have been disproportionately affected by the impacts of conflict in Kherson. On February 14-15, 2019, the Global Network of Women Peacebuilders (GNWP) together with its local partner, Democracy Development Center, held a writing workshop (“writeshop”) on the implementation of the United Nations Security Council (UNSCR) 1325 and Ukraine’s National Action Plan (NAP) in Kherson.

The workshop gathered over 30 participants from different rayons and cities in the Kherson oblast. Participants included representatives of the Oblast State Administration, local (rayon) administrations and councils, city councils and the civil society. The “writeshop” built on the outcomes of GNWP’s Localization workshop in Kherson, held in June 2018.

An Oblast Action Plan was adopted in Kherson in January 2019, shortly before the “writeshop” was held. Therefore, building on the outcomes of the 2018 activities, during which key priorities for WPS implementation in the oblast were identified, the “writeshop” focused on reviewing the Oblast Action Plan to ensure that it is specific, measurable, achievable, relevant and time-bound (SMART). The participants, with support from GNWP and DDC experts, worked to revise objectives of the plan, making them more “SMART”, and to define concrete indicators. Three objectives were strengthened in this way during the “writeshop”. The State Oblast Administration committed to integrating the changes into the Oblast Action Plan, as well as reviewing the other objectives in a similar manner.

In a short interview, Mr. Ihor Pohorily, Head of Family, Gender and Children Rehabilitation section at the Department of Social Protection in the Kherson Oblast Administration, talks about why UNSCR 1325 is important to Kherson, and how the Oblast Administration plans to ensure its effective implementation.

Q: Why is United Nations Resolution 1325 relevant to your oblast?

A: UNSCR 1325 is very important for Kherson because women’s issues are important to the oblast. The objective of this plan is to increase the participation of women at all levels of decision-making so that the women are well represented in all spheres of governance in Kherson.

Q: Can you tell us about the Kherson Oblast Action Plan and how you adopted it?

The Oblast Action Plan for the implementation of UNSCR 1325 was developed following a directive from Ukraine’s Prime Minister. It was developed by the local authorities, whose duty it is to implement national laws in the oblast, and to adapt them to the local reality in Kherson.

The plan also provides orientation for local authorities, including the authorities in the rayons and cities, to develop Local Action Plans.

The Local Action Plans should respond to the concrete issues and the needs of the local populations.

Q: What are the next steps for implementing UNSCR 1325 in Kherson following the workshop conducted by GNWP and Democracy Development Center on 14-15 February 2019?

Following the workshop, today and yesterday, conducted with the support of our international partners, we committed to revising the Oblast Action Plan, using the “SMART” (Specific, Measurable, Actionable, Relevant and Time-bound) methodology. This will be the first step towards updating and strengthening the plan. We will also collect feedback from the implementers at the local level, in order to identify the gaps in the plan and make necessary changes to ensure effective implementation of the Oblast Action Plan.

Q: How do you see your role in promoting women’s meaningful participation at all levels?

My role as a representative of the Oblast State Administration is to coordinate the actions by other key stakeholders, build the capacity of specialists who can support decision-makers at the local level to effectively implement their Local Action Plans, strengthen and monitor the activities and implementation at the local level.

Women are our everything. As a man, I strive to support them and help to make their life better every day.

“Iraq has a strong legal framework for women’s empowerment; we must now ensure that these laws and policies are implemented” declared Qassem Abdullah Jasim, the head of the Secretariat of Iraq’s Cross-Sectoral Task Force (CSTF) for the implementation of the United Nations Security Council Resolution (UNSCR) 1325 during the opening of the Localization Consultation workshop organized by GNWP. The workshop was held in Beirut, Lebanon on 16-17 November 2018 in partnership with Women’s Empowerment Organization (WEO), CSTF and with support from Global Affairs Canada.

Iraq was the first Arab country to adopt a National Action Plan (NAP) for the implementation of UNSCR 1325 in 2014. Four years later, the country faces a different reality, due to the war with the Islamic State of Iraq and the Levant (ISIL). In December 2017, the Iraqi Prime Minister Haider al-Abadi announced a victory over ISIL. However, insecurity persists in many parts of the country, and the impacts of the conflict are still evident. As the country develops its second NAP, it is critical to reflect on how its implementation could best respond to the changing nature of the conflict.

The Localization Consultation provided a space for such reflection. It brought together key NAP stakeholders – both government and civil society – from the Baghdad Federal Government and the Kurdistan Regional Government in Erbil. During the two days, they listened to expert presentations about Localization approach – an internationally recognized key strategy for NAP implementation – as well as about the decentralization system in Iraq and its implications for WPS implementation in governorates.

The participants discussed lessons learned from Iraq’s first NAP; identified tools that local governments have at their disposal to implement WPS, such as drafting local policies and Local Action Plans; and came up with concrete steps for ensuring NAP implementation at both national and local levels. They also worked on a “roadmap” for the completion of the 2nd NAP, assessing the progress thus far and assigning concrete timelines and responsibilities for the remaining tasks. The CSTF hopes to launch the NAP in summer 2019.

At the end of the second day of the consultation, the Iraqi stakeholders were joined by civil society representatives from Lebanon and Syria, who shared their perspectives on NAP development and WPS implementation. The regional experience exchange provided useful insights into the good practices of NAP planning. An important message was the need to include refugee women in the consultations and development of the NAP.

Inclusivity; local approach; and strong coordination are the essential elements of a high-impact NAP. In order to be implemented, Iraq’s 2nd NAP has to integrate these principles. The Localization Consultation was the first step towards ensuring that the plan is inclusive and locally-driven. GNWP looks forward to continuing the work with the CSTF and other key stakeholders to effectively implement the WPS resolutions in Iraq!

*The author is a Program Coordinator at the Global Network of Women Peacebuilders. 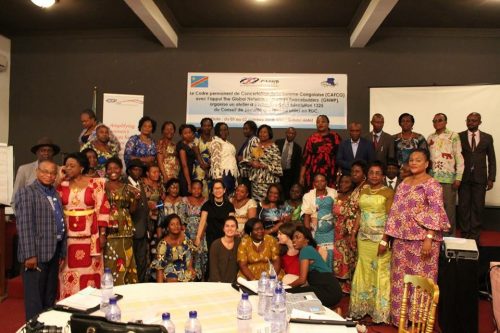 In the South Kivu province of the Democratic Republic of Congo (DRC), the number of women appointed as provincial ministers increased from 0 in 2013 to 3 in 2018. In the same province, governor Marcellin Cishambo created a committee solely for the organization, function, and implementation of UNSCR 1325. In Katanga, traditional chiefs have begun to regularly include UNSCR 1325 in their work, as well as increasingly include women in their local security council. At the national level, fifty women were trained specifically to increase their participation in politics. These are just some of the impacts that Localization of UNSCR 1325 facilitated by GNWP between 2013 and 2015 had on the lives of Congolese women. Supporting local women as leaders and active agents of peace is all the more important in DRC, where women regularly face physical, sexual, economic, social, cultural, and political marginalization; and where regional peace and security challenges are felt by local communities from North to South Kivu.

DRC has adopted its second generation National Action Plan for the implementation of UNSCR 1325 on September 8th, 2018. However, the institutional and cultural resistance to its effective implementation persists on many levels throughout the country. This is compounded by the social and political developments happening, such as the recent decentralization structure, and the upcoming and highly anticipated presidential elections. All these elements make this a critical time for GNWP to evaluate and reinforce the implementation of WPS resolutions in DRC.

On October 1-3, 2018, GNWP, in partnership with the Cadre Permanent de Concertation de la Femme Congolaise (CAFCO), and with support from the Peace and Stabilization Operations Program of the Global Affairs Canada, organized a workshop to evaluate the progress and impact of the Localization program to date, and to identify remaining gaps and recommendations for the future. The workshop brought together grassroots women activists, local and national authorities, and traditional leaders, who took part in the Localization program in South Kivu and Katanga in 2013, as well as representatives from North Kivu and Province Orientale, who plan to implement the strategy in their communities. Among the participants were several women who are campaigning for national and provincial parliamentary elections scheduled for December, and whose insights and perspectives were invaluable.

The participants asked themselves, “what were the most significant changes, both positive and negative, following the Localization programme in 2013? What were the successes and gaps in each province?” The exercise resulted in lively and engaging discussions over the evidence of the impacts. In South Kivu, the strategy contributed directly to raising awareness and taking ownership of UNSCR 1325 by authorities at the local and provincial level, and a Steering Committee for the implementation of UNSCR 1325 was established by the provincial government. In Katanga, Localization increased the ownership of UNSCR 1325 by local authorities and traditional leaders, who have begun regularly including UNSCR 1325 in their work, appointing women in leadership positions, and in their local security council. At the national level, the commitments made during the Localization workshop in 2013 contributed directly to the successful advocacy for the inclusion of marginalized groups, such as youth and women with disabilities, as groups of concern in the most recent National Action Plan. In addition, a local civil society organization, CONAFED, undertook a program to train 50 young women for political participation. Another significant contribution was the nomination of the first women generals in the national police and army.

The participants also discussed the remaining challenges such as the failure to implement some of the laws and policies due to a lack of budget. To counter that, the participants worked in groups disaggregated by province to produce a set of concrete recommendations, which will be shared with local and national stakeholders. The delegations from North Kivu and Kinshasa also planned to implement Localization and develop local action plans within their provinces.

“Decentralization and Localization go hand in hand; they are both about giving more power to the people,” –this message, highlighted by Professor Mukendi Munti from the Ministry of Decentralization, resonates particularly strongly in the Congolese context. The evaluation workshop has generated invaluable insights and reinforced the commitment to continue the implementation of the WPS agenda at the local level, and GNWP will continue to support the local stakeholders, and work with participants to ensure that their concrete commitments will be materialized into actions.

*Dinah Lakehal is a Program Officer at the Global Network of Women Peacebuilders (GNWP).