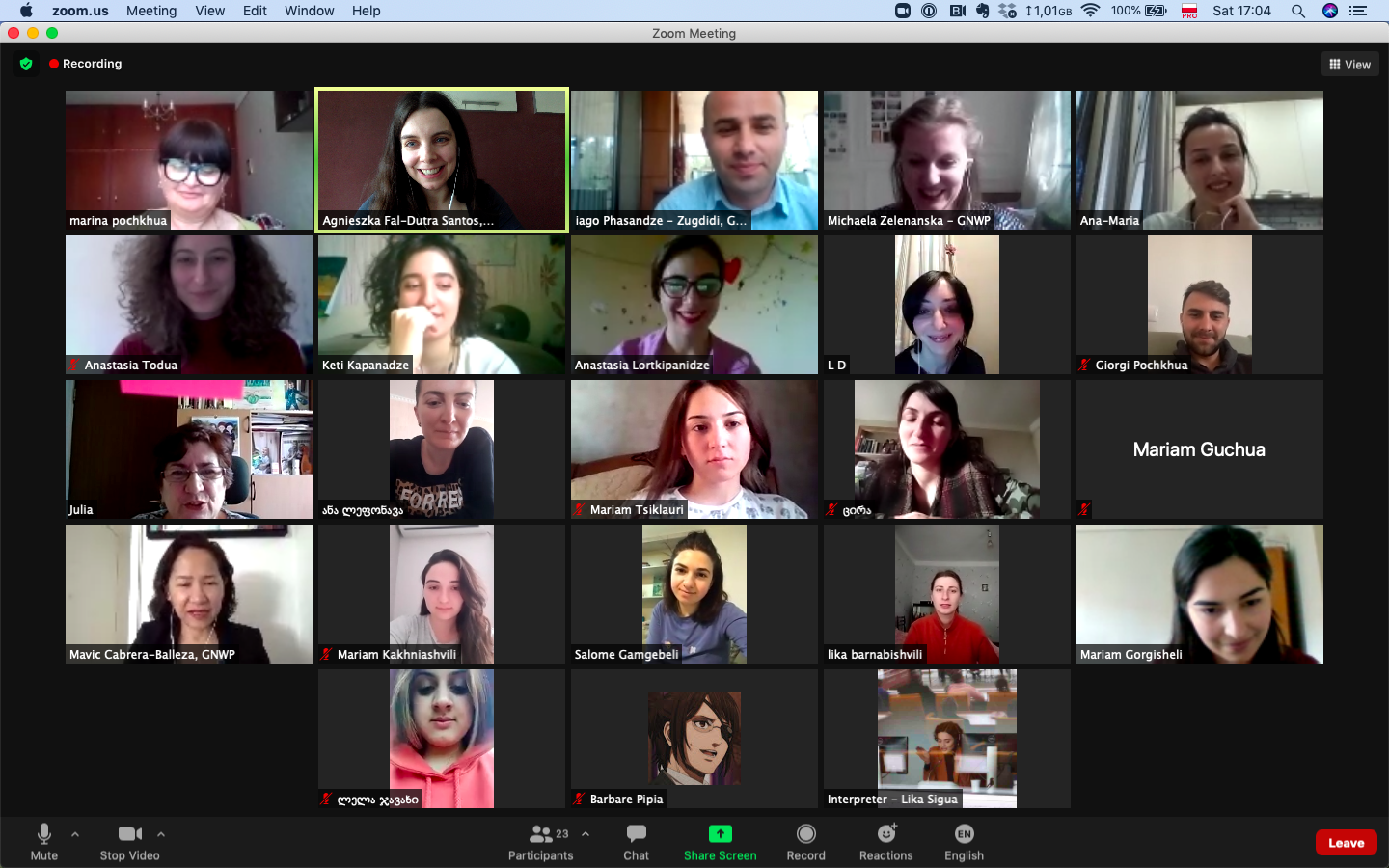 “To me, peace means being able to move freely, cross the border you see behind me. But I cannot do it.” –Georgian participant talking about what peace and security means to them.

“Peace means stability, access to economic opportunities. In the villages along the Administrative Border Line people do not have access to jobs. Living here means being stressed all the time.” – Georgian participant talking about living along the Administrative Border Line separating Georgia from the breakaway republics of Abkhazia and South Ossetia

The quotes above are how young women from Georgia describe peace in their country. Economic opportunities, mental health, wellbeing, and mobility are the key attributes missing from their lives. They still feel the impacts of war – which officially ended in 2008, when many of them were still young children. They are determined, and ready to work towards sustainable peace.

To support young women’s leadership in peacebuilding, the Global Network of Women Peacebuilders (GNWP) and the IDP Women Association ‘’Consent’’, organized an introductory three-day training on Women, Peace and Security (WPS), Youth, Peace and Security (YPS) and peacebuilding for young women and men in Georgia. The event took place on April 24-26 2021 and was supported by the Austrian Development Agency (ADA). The participants had the opportunity to analyse the relevance of these critical agendas for young people in Georgia and to talk about the importance of youth-led initiatives in building sustainable peace. The training also served as a launch of the Young Women Leaders for Peace (YWL) program in Georgia.

Since 2014, the GNWP´s YWL program has supported more than 7,000 young women in conflict-affected countries and communities to enhance their skills, capacities and resilience and fully realize their potential as leaders and agents of peace. The program is being implemented in seven countries outside of Georgia: Afghanistan, Bangladesh, the Democratic Republic of Congo (DRC), Indonesia, the Philippines, South Sudan, and Ukraine. GNWP has worked with its partners and young women to tailor a methodology to the context and needs of each participating country. They have also supported young women to run their own peacebuilding initiatives – from organizing community peace dialogues, to teaching literacy in refugee camps, to running civic education campaigns via social media.

The participants shared their perspective on the situation in their country. Many of the young people were directly affected by the long conflict between Georgia and Abkhazia and South Ossetia: two regions that have seceded from Georgia and formally declared independence in 1999 and 1991 respectively. Even though the conflict in Georgia is often described as “frozen”, it still has tangible impacts on the lives of Georgian people – including young women and men. Some of the participants were internally displaced or lived in the so-called ABL (Administrative Boundary Line) villages, where skirmishes still happen. Therefore they feel the consequences of the conflict every day.

Throughout the training, the young participants became acquainted with the WPS and YPS agendas. They showed a very good understanding of the effects of conflict and violence on women and young people. Thanks to the engaging “crash course” on peacebuilding, organized by Yago Pasandze, Executive Director of NGO Saunje and youth trainer, the participants were able to discuss and explore specific concepts, such as peace trust recovery, democracy and justice, and their relevance to their own situations. They also directly applied their newly-gained knowledge through interactive exercises.

All the young people who participated in the training emphasized the necessity of achieving a sustainable peace in Georgia. They also highlighted the role of young people in conflict resolution. The participants were primarily from the new generation that does not remember the once peaceful coexistence of Georgians and Abkhazians. Nevertheless, they shared their hope that it would be their generation who would build the bridges between the two sides of the border.

The 3-day training was full of inspiration and motivation. The GNWP team was glad to see the enthusiasm of the participants, and look forward to continuing the implementation of the YWL program in Georgia. Didi madloba! 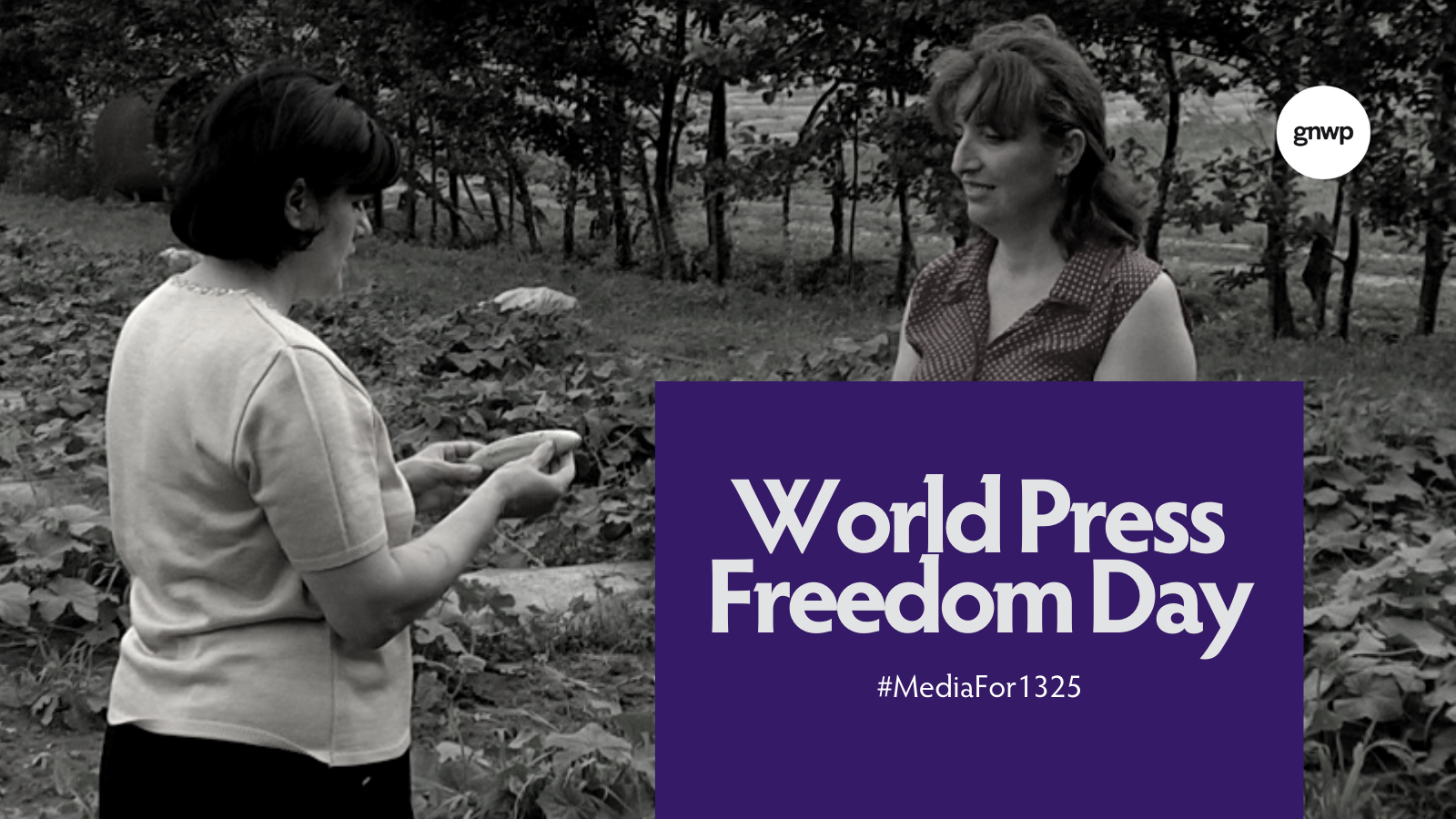 The Global Network of Women Peacebuilders (GNWP) celebrates World Press Freedom Day by highlighting the importance of independent media in building peaceful, gender-equal, and inclusive societies. Journalists play a key role in spreading information about the Women, Peace and Security (WPS) agenda and in highlighting women’s roles as leaders, peacebuilders, and decision-makers. GNWP’s “Full-cycle Implementation” of WPS strategy incorporates the critical work of the media, taking a multidimensional approach across three main areas:

The #MediaFor1325 competitions provide an incentive for journalists to integrate a gender lens into their reporting on peace and conflict issues, and raise awareness of the WPS agenda. As a result, they contribute to shifting the perception of women as passive victims to recognizing women as agents of peace. Since 2018, the GNWP in partnership with the Austrian Development Agency (ADA) and the Norwegian Agency for Development Cooperation (Norad) held six media competitions in Colombia, Georgia, Moldova, Kenya, the Philippines, and Ukraine.

This year, we commemorate World Press Freedom Day with a throwback to some of the winning materials.

The work of women peacebuilders in Colombia has been indispensable to reaching and signing the peace agreement between the government and Fuerzas Armadas Revolucionarias de Colombia (FARC or the Revolutionary Armed Forces of Colombia), and remains critical in monitoring its implementation. It is important that the invaluable contribution of women peacebuilders in Colombia is recognized and made visible to change the public narrative on women’s role in peace processes and in leadership. GNWP, in partnership with Red Nacional de Mujeres (RNM) and with support from Norad, trained journalists on the WPS agenda and the role the media plays to promote effective implementation. The training was followed by a national #MediaFor1325 competition organized in August 2020, in partnership with Pacifista – a media collective dedicated to promoting journalism rooted in peace and human rights principles. The competition had two categories: professional journalists and journalism students. Additionally, a special prize was awarded for work that provided an original angle on women’s leadership in peacebuilding. The winning podcast, by Lidha Beltrán Valero, highlights women’s experiences in challenging patriarchy, preventing violence and sustaining peace in local communities. Jeimmy Lorena Gutiérrez Turmequé, with her piece about Indigenous leaders from Xuacha, was awarded the students category and the special prize.

With support from ADA, GNWP and its Georgian partner, Women’s Information Center (WIC), organized an online training series for journalists. The training aimed to increase the awareness of Georgian journalists on their roles in supporting gender equality, women’s meaningful participation in the implementation of Georgia’s National Action Plan on UNSCR 1325, and in promoting gender- and conflict-sensitive responses to the COVID-19 pandemic. The journalists expressed appreciation for the knowledge and skills they acquired and committed to being more gender-sensitive in conflict reporting in order to influence the public narrative on women’s roles in peace processes. The training was accompanied by a national #MediaFor1325 competition. The winning article by Nino Chibchiuri discusses the lives of women on the occupation line and how the pandemics negatively affected them. Other awarded articles feature women entrepreneurs and the struggles of peace activists in Abkhazia. “During the pandemic, rural women showed solidarity with each other and helped others as much as they could,” Chibchiuri stressed.

“Rural women during the pandemic showed solidarity with each other and helped others as much as they could.” -Nino Chibchiuri, 2020 winning journalist in Georgia

In Ukraine, GNWP and Democracy Development Center have conducted a series of training with journalists since 2017. These trainings have been instrumental in raising the journalists’ awareness of their important role in shaping public opinions on women’s leadership in peace processes. It has also become pivotal in integrating the media in the implementation of the WPS agenda. The 2020 media competition was organized in partnership with Ukraine’s State Radio and Television Broadcasting Commission. Dmytro Semenyuk’s winning entry focuses on breaking stereotypes and highlighting the active role women play in patrol policing to prevent violence. “Women have become indispensable in resolving conflicts,” Semenyuk expressed.  Olga Chernykova, the author of another winning article describes an inspiring life story of a woman journalist who had to flee her home city due to the violent conflict.

These powerful stories show that women around the world share similar struggles and continue to work for the advancement of women’s rights, peace, and justice in their communities. On this World Press Freedom Day, GNWP commits to continue to work with journalists in amplifying the voices of women peacebuilders across the world!