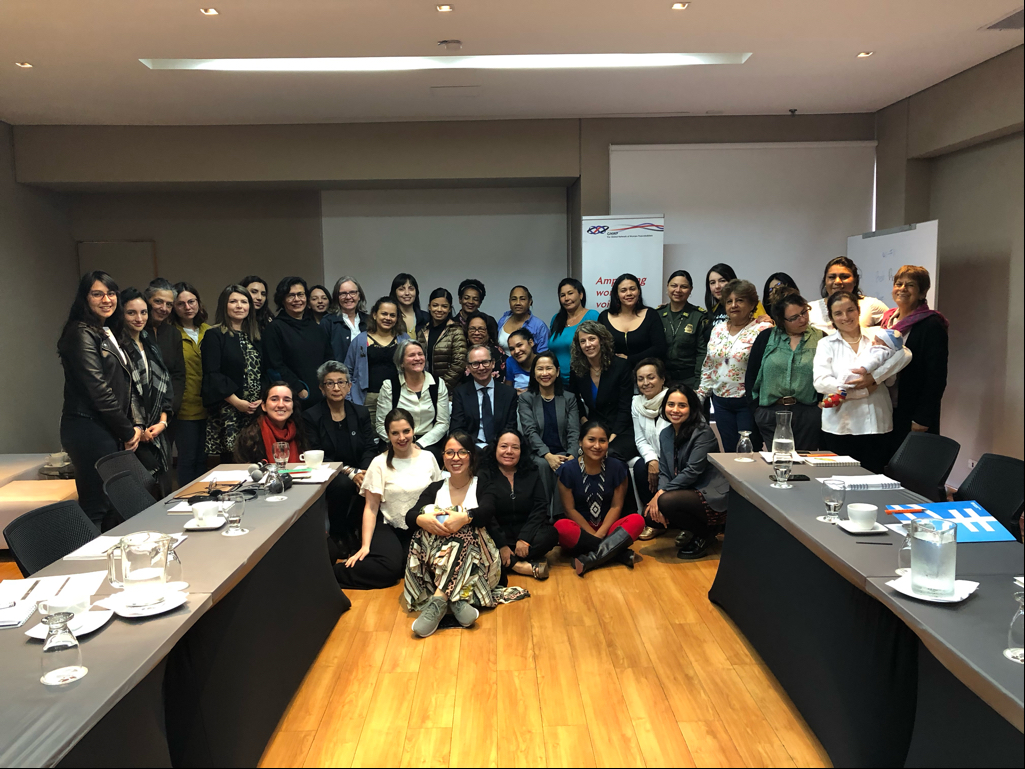 This meeting, supported by the Norwegian Agency for Development Cooperation (NORAD), took place at a time of continued uncertainty in Colombia. Although the 2016 peace agreement with the Colombian Revolutionary Armed Forces (Fuerzas Armadas Revolucionarias de Colombia, FARC) put an end to over five years of violent conflict, the implementation of the agreement remains slow and uneven. This is despite the adoption of plans that aim to facilitate the reintegration of former FARC combatants and to protect social and community leaders, human rights defenders and journalists. The gender provisions of the peace agreement, which have been hailed internationally as innovative and progressive, have yet to be implemented. Meanwhile, the killing of civil society leaders and human rights defenders persists; and peace talks with the National Liberation Army (Ejército de Liberación Nacional, ELN) have been suspended. Sustained efforts to build peace, prevent conflict and cultivate a culture of peace—with women at the core—are imperative.

Against this background, the National Peace Meeting brought together women leaders from the capital as well as from departments most affected by conflict and violence, such as Arauca, Bolivar, Cauca, Choco, Montes de Maria, Putumayo and Tolima. They were joined by representatives of the Colombian Government, UN Women Colombia, journalists, and representatives of the Embassies of Norway and Sweden to Colombia. Ambassador John Petter Ophdahl from the Norwegian Embassy to Colombia opened the Meeting by recalling the key role women played in peace negotiations and the role they now have to play in implementing the peace agreement.

The Meeting provided a space to analyze the current state of the implementation of the peace agreement with the FARC, especially the gender provisions; formulate strategies to contribute to effective implementation; and identify concrete actions to ensure a comprehensive and sustainable peace in Colombia.

Participants shared their own experiences and perspectives on peace. The message from the women leaders from Tolima, Cauca, Putumayo, Caribe and Montes de Maria, as well as a representative of the LGBTQ community from Choco was clear: despite the insecurity, and the challenging political context Colombia is facing at the moment, women leaders refuse to give up. They will continue to work to ensure that the peace agreement, especially the gender provisions, are implemented.

Participants also discussed information about national-level implementation provided by RNM & GPaz, and a global perspective brought by GNWP. After sharing statistics about the implementation of the gender-sensitive provisions of the agreement, Claudia Mejia from GPaz emphasized that while many challenges remain, civil society must not lose hope. “We have to move forward!” she said. “The peace agreement implementation timeframe is 15 years…We still have 13 years to go, which are enough to reach a great implementation! Colombia will be able to do this!” A representative of the Ombudsman’s Office of Colombia, and a member of the FARC political party (and a female ex-combatant) also spoke about the ongoing efforts to implement the agreement.

The National Peace Meeting was part of a broader project, implemented by GNWP in partnership with RNM and support from NORAD, which aims to contribute to building a sustainable peace in Colombia through a two-pronged approach. On the one hand, the project enhances the capacities of local women to meaningfully participate in the implementation of peace agreements. On the other hand, it supports local women to build their negotiating skills and develop and implement strategies to advocate for the reinitiating of the negotiations with ELN, to ensure a complete peace in Colombia. GNWP and RNM will conduct Localization of the peace agreement and hold capacity-building for women in Cauca and Tolima in the last quarter of 2019.

Colombia finds itself at a critical juncture. To ensure that it continues on the road to peace, it is necessary to meaningfully include individual women and women’s rights organizations in the implementation of the peace agreement. As Beatriz Quintero, the Director of RNM, shared, “We see the opportunity in peace – less deaths, more possibilities – but we have to continue fighting for it.” Women are the cornerstone of peace in Colombia – and they will not stop in their quest for it.

The Security Council Members, invited by the Colombian government, traveled to Bogota and Cauca department, including the Santa Rosa Territorial Area for Training and Reintegration. During the trip, they met FARC members, political parties, civil society, the United Nations Verification Mission (UNVM), and other key stakeholders. The delegation recognized the achievements of the peace process to date, as highlighted in the UN Secretary-General’s 26 June report on the situation in Colombia. They lauded the contributions of the UNVM and welcomed the government’s request to extend the mission for another year after its mandate expires in September 2019. The Members of the delegation also recognized the important role of youth and women leaders in ensuring the effective implementation of the peace agreement, preventing violence and insecurity, and building an inclusive peace.

However, the delegation acknowledged the remaining challenges, including the slow implementation of the peace agreement and the ongoing threats to civil society and social leaders. They called for increased efforts towards implementation and greater collaboration between the government, the FARC and civil society.

The conclusions of the Security Council members’ visit in Colombia echo some of the pressing concerns of local women leaders who participated in the GNWP National Peace Meeting. As they return to New York, they should carry the demands of the Colombian women with them, and continue to call on the Colombian government to guarantee safety of civil society leaders and human rights defenders, and meaningful participation of women in the implementation of the peace agreement between the government and the FARC.