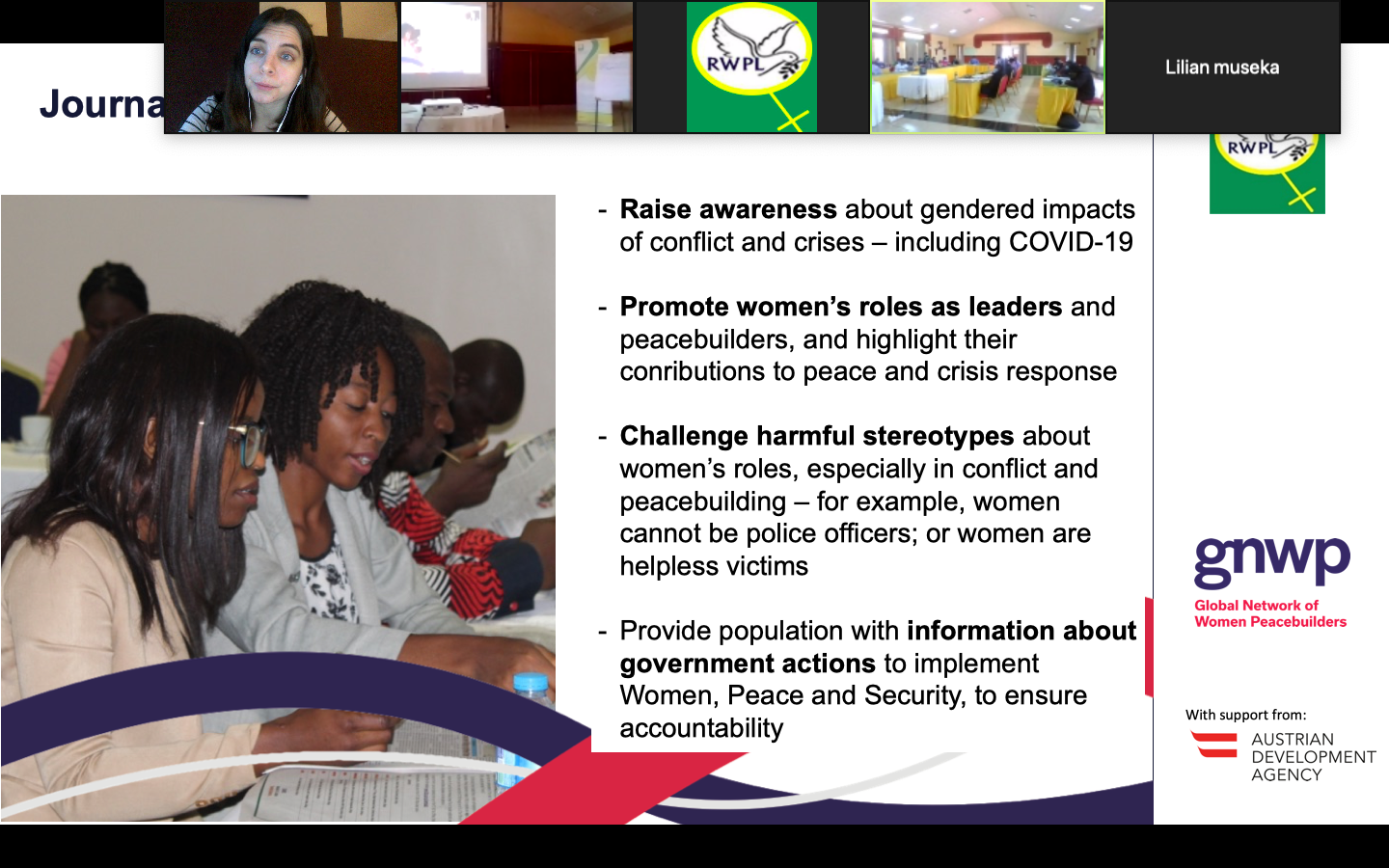 “After this training [facilitated by GNWP and RWPL], I will retell the narrative of what women go through in conflicts – to show them as leaders, and not helpless victims.” – Evans Kipkura, Nation Media, Elgeyo Marakwet

Kenya launched its 2nd National Action Plan (NAP) on Women, Peace and Security (WPS) in April 2020, at a time when the global COVID-19 pandemic has made the need for effective communication, coordination, and implementation of the WPS agenda more urgent than ever. Accurate and reliable information is critical to effective management of the pandemic and building sustainable and inclusive peace. During COVID-19, misinformation and disinformation have been a threat to both peace and security, and to gender equality. In Kenya, false or inaccurate information about the virus and how to prevent it contributed to these negative impacts. The media plays a key role in not only sharing, but also fact-checking information, in order to support crisis response, lower tensions between communities, and maintain peace.

Recognizing the important role of the media in promoting gender equality and sustainable peace, the Global Network of Women Peacebuilders (GNWP) in partnership with Rural Women Peace Link (RWPL) and with support from the Austrian Development Cooperation (ADC) held a training workshop on WPS for Kenyan journalists on December 8-9, 2020. The training is part of GNWP’s ongoing efforts to engage journalists and raise their awareness and skills needed to fulfil their role in the implementation of the WPS resolutions. With support from ADC, similar trainings were also held in Georgia and Moldova in 2020, and further trainings in Armenia and Uganda are planned for 2021. The workshop in Kenya was held in a hybrid form – with most participants meeting in person, and some experts, including GNWP staff, joining via Zoom. During the workshop, 22 journalists from different counties in the North Rift and Western Kenya regions discussed the role of the media in the implementation of the United Nations Security Council Resolution (UNSCR) 1325 and other WPS resolutions. The workshop convened journalists working in local and national media houses, who shared their experiences in reporting the stories of women living in conflict-affected areas. They also reflected on how they can more effectively contribute to the implementation of the WPS agenda.

The workshop’s sessions included expert presentations on the UNSCR 1325 and the WPS agenda and on Kenya’s NAP on WPS. These were complemented by interactive discussions, during which the journalists spoke of the impact of their work and the challenges they encounter in reporting about women in conflict and peacebuilding. From the discussions, it was apparent that the journalists have a good understanding of the conflict and security situation across the country. From raising awareness about the female genital mutilation, to reporting on gender-based violence cases, electoral violence and ethnic conflict, the journalists have been key players in increasing awareness on the impact of conflict on women and girls in the country. With digitalization and a growing number of internet users in Kenya, there has been increased consumption of media reports over the past few years, accompanied by a rise in community and digital journalism. Civil society groups in Kenya rely heavily on the information provided by the media when working to implement and monitor the implementation of the WPS agenda and to hold institutions such as the police, and individuals who instigate violence, accountable.

The training demonstrated that despite their reporting on issues of conflict and violence, the journalists’ knowledge of UNSCR 1325, and understanding of their own role in implementing it, was minimal. Since the media remains the primary source of information for most people in the country, the journalists’ lack of understanding of the agenda translates into a lack of knowledge and broad-base support for its implementation, especially at the community level. Overall, much more remains to be done to increase the media’s role in challenging the portrayal of women as passive victims of violence in the country, and highlighting their leadership – a foundational idea behind the WPS agenda.

During the workshop, GNWP and RWPL highlighted the importance of changing the narrative, and sharing more stories of women’s participation and leadership in peace processes, peacebuilding and decision-making. To fully implement the ground-breaking WPS agenda, the media must break with the narrative of women as victims. It should provide women across all levels – especially at the grassroots – with a platform to showcase their involvement in building sustainable peace, and support their efforts by giving visibility to the impact of their work.

Workshop participants agreed that a media strategy to support the implementation of the WPS agenda through gender-sensitive reporting in Kenya is necessary to follow-up on the training’s conclusions. GNWP and its partner RWPL are committed to continuing the work with the journalists to develop and adopt such a strategy.

GNWP and RWPL will also continue to amplify the role of journalists in the implementation of WPS resolutions in Kenya through continued training and providing incentives for gender-responsive reporting. Following the training in December 2020, in January 2021, we launched the first Media and WPS competition in Kenya. The competition invites journalists and journalism students to submit publications that aim at amplifying the stories of women’s leadership in peacebuilding and conflict prevention. We cannot wait to read the stories told and continue to work jointly with the media in Kenya towards gender equality and effective implementation of the WPS agenda! 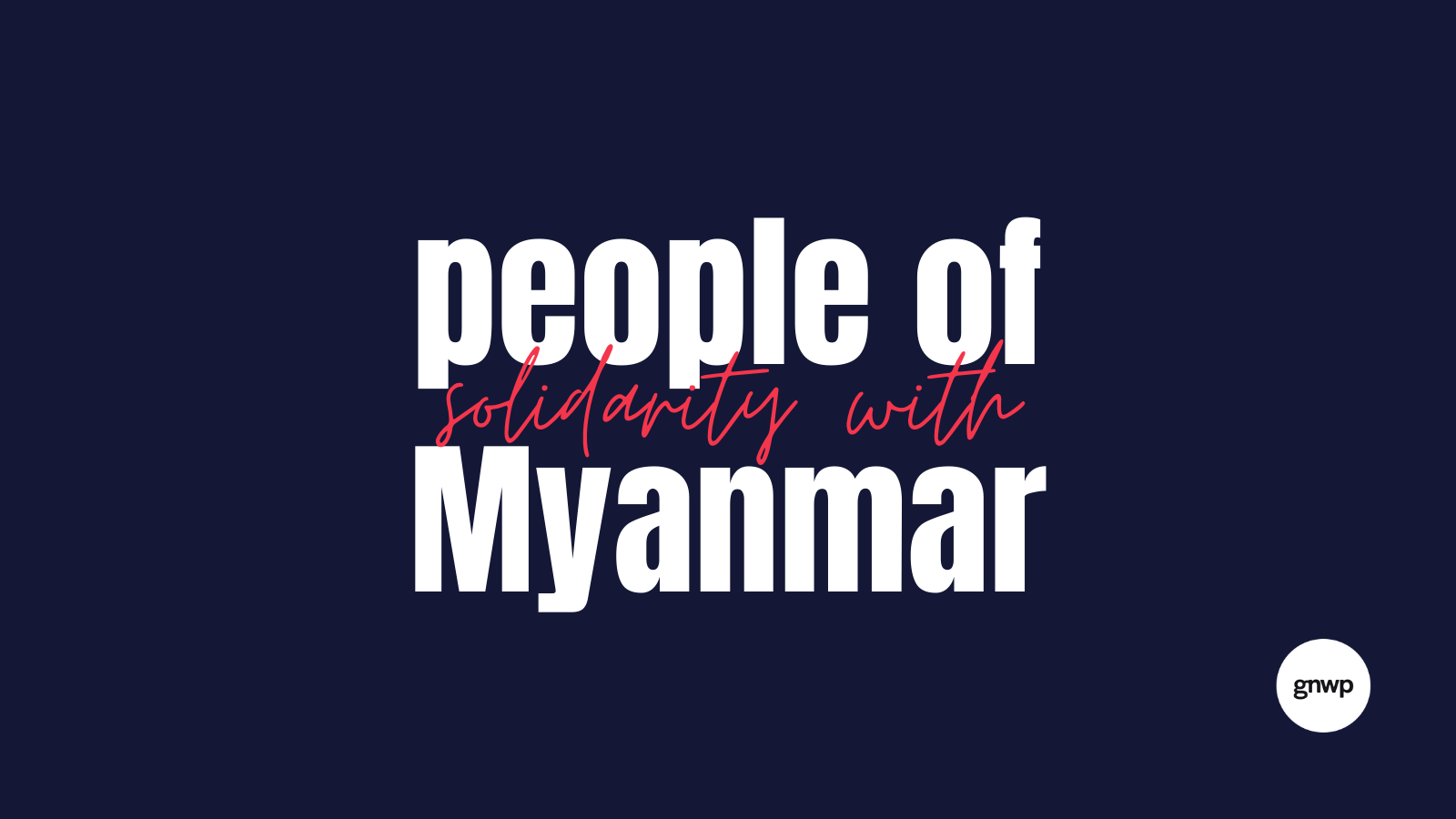 The Global Network of Women Peacebuilders (GNWP) strongly condemns the military coup, which jeopardizes the peaceful democratic transition in Myanmar. On 1 February 2021, the Tatmadaw (military) arbitrarily detained civilian government officials and civil society leaders and declared a state of emergency on the grounds of disputed results of the national elections in November 2020. Internet connections and mobile phone service were restricted as fears of military-sponsored violence and unlawful detentions rose. The actions taken by the Tatmadaw infringe the civil liberties of the people of Myanmar.

The military rule in Myanmar has overseen a genocidal campaign against the Rohingya, along with countless other crimes against humanity targeted at marginalized ethnic minorities. The impunity for these crimes has encouraged further seizure of power and disruption of democratic processes.  GNWP is deeply concerned that these recent actions by the military may lead to further violence and the disruption of humanitarian aid delivery to internally displaced ethnic minorities living in dire conditions. We call on the Tatmadaw to adhere to international human rights and humanitarian law, which prohibits attacks on civilians and arbitrary detention.

GNWP stands in solidarity with the people of Myanmar, especially grassroots women and youth peacebuilders. We echo their calls for:

We urge the United Nations and the rest of the international community to take all actions necessary to protect civilians and prioritize their needs as they continue to grapple with the impact of the COVID-19 pandemic. Community protection mechanisms must be established for civil society activists and peacebuilders leading civil disobedience campaigns to protest the coup. It is critical that the United Nations Security Council (UNSC) condemn the coup, suspend all engagement with the Tatmadaw, and establish a global arms embargo. To hold perpetrators accountable for crimes of genocide, the situation in Myanmar must be referred to the International Criminal Court. Without swift, concerted action from the international community, the human rights of the people of Myanmar, particularly ethnic minorities, will continue to be violated without consequence.