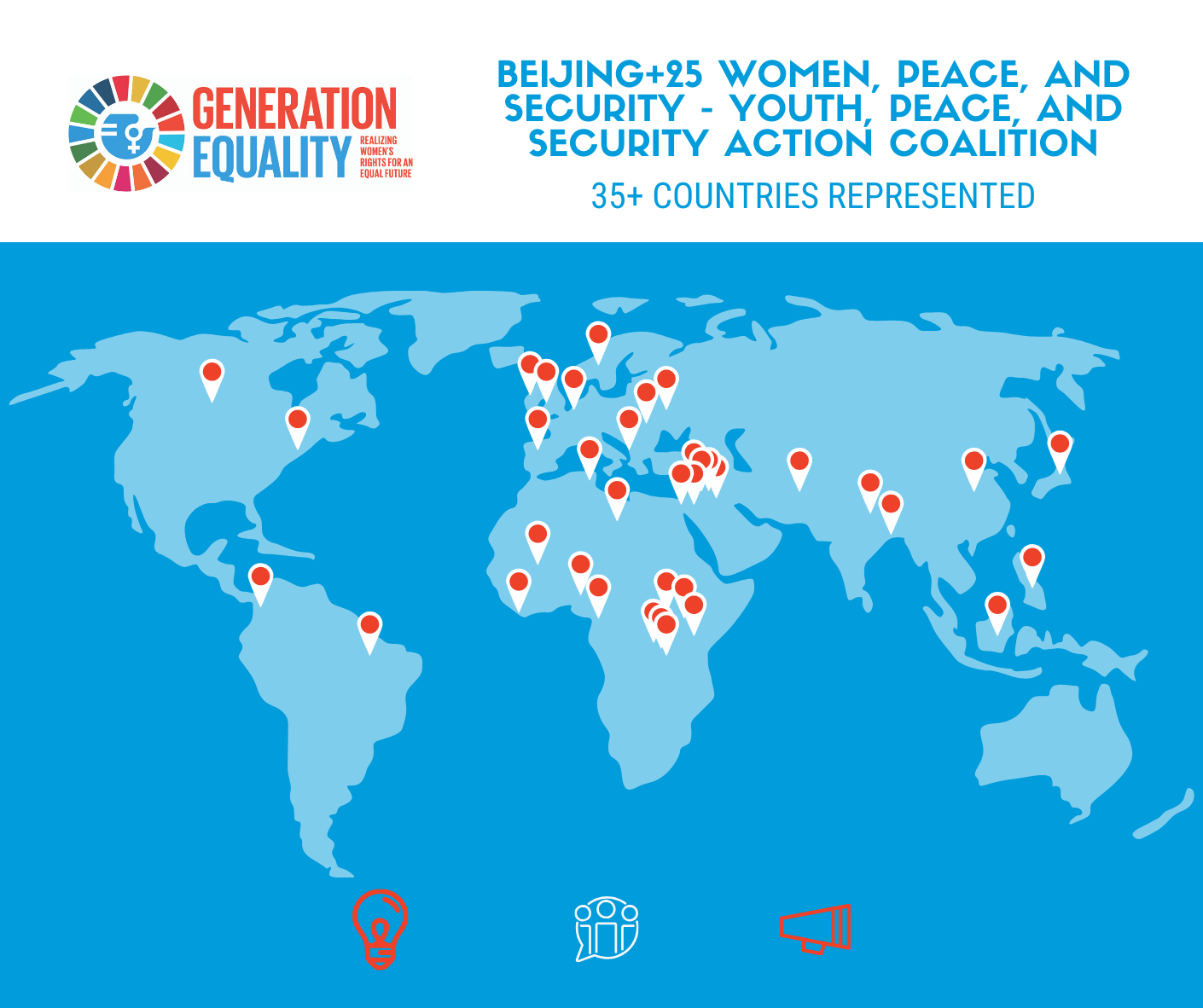 Moreover, the Beijing+25 WPS-YPS Action Coalition is committed to increasing the awareness of civil society organizations, in particular grassroots organizations working in conflict-affected countries and territories, about the Beijing Declaration and Platform for Action and the various processes related to its 25th anniversary. This is critical to ensuring that civil society’s key messages are reflected in all discussions on Beijing +25, including the Generation Equality Global Forum and their outcome documents. The Beijing+25 WPS-YPS Action Coalition supports strong participation and co-leadership of women and young women from local communities affected by conflicts in the Beijing+25 processes.

2020 is a pivotal year for gender equality. The 25th anniversary of the Beijing Conference, the 20th anniversary of UN Security Council Resolution (UNSCR) 1325, and the 5th anniversary of UN Security Council Resolution (UNSCR) 2250, are catalytic moments to move both the Women and Peace and Security and Youth and Peace and Security agendas forward.  Therefore, we express deep concern over the lack of representation of grassroots women and youth peacebuilders and the marginalization of the WPS and YPS agendas in the Beijing+25 regional and global processes. We are alarmed about the lack of broad consultation with civil society in the development of the official Action Coalitions and cross-cutting levers of the Generation Equality Global Forum.  We are seriously concerned that there is no official Action Coalition dedicated to peace and security even though evidence-based data shows armed conflict is inextricably linked to gender inequality.[1] The Secretary-General has identified the lack of peace and security as one of greatest threats to 21st century progress, and one of four priority focus areas for 2020.[2]

1.     Many grassroots women’s rights and youth organizations have found it impossible to participate in Beijing+25 processes due to lack of information, awareness, funding, capacity, access to internet, and language restrictions. For example, despite awareness of the limited number of women peacebuilders at the High-level Meeting on Progress in the Implementation of the Beijing Declaration and Platform for Action in West Asia and despite expressed interest from women peacebuilders to participate, the organizers of the High-level meeting were unable to provide support in order for the women to contribute to this important discussion.

2.     The marginalization and limited participation of women and youth peacebuilders has resulted in weak language on the WPS and YPS agendas in regional outcome documents. For example, the Arab Declaration on Progress in the implementation of the Beijing Declaration and Platform for Action fails to highlight the importance of the meaningful participation of women and girls in all aspects of conflict prevention, relief and recovery, and peacebuilding. Similarly, the reports from the regional intergovernmental consultations in Africa[3] and Asia and the Pacific[4] lack specific recommendations on the effective implementation of the YPS agenda, particularly the involvement of young women and LGBTQIA+ youth in peace processes and political decision-making.

3.     The official Action Coalitions and cross-cutting levers identified by UN Women—the key outcomes of the Generation Equality Global Forum—do not include a specific constituency working on WPS and YPS. The criteria for the official Action Coalitions developed by UN Women includes an assessment of the nature of the need to address the theme (whether the theme has proven deeply entrenched and persistent over the last 25 years) and the universality of the scope of the theme on women and girls around the world. It is undeniable that the issues at the intersection of the WPS and YPS agendas are urgent, persistent, prevalent and universal.

Twenty-five years after the adoption of the Beijing Declaration and Platform for Action, armed conflict continues to be a major obstacle to the fulfilment of women’s rights and gender equality. In 2016, more countries experienced violent conflict than at any time in nearly 30 years. The risk of nuclear conflict is growing as key treaties on nuclear disarmament are increasingly under threat, and nuclear competition among countries is intensifying.[5] It has been established that the gendered impact of conflict increases the levels of sexual and gender-based violence, marginalization, and discrimination in varied forms experienced by girls, young women, LGBTQIA+ persons, and women. In addition, research shows that a state’s level of gender equality can serve as a predictor of armed conflict, whether measuring conflict between states or within states.[6] Therefore, conflict prevention, sustainable peace, gender equality, and women’s empowerment are inextricably linked. Moreover, Women and Armed Conflict is enshrined as one of the critical areas of concern in the Beijing Declaration and Platform for Action[7].

The announcement of the official list of Action Coalitions states that “the context of conflict could be incorporated within the theme on Gender-Based Violence.”[8] We believe that discussing peace and security only through the framework of gender-based violence will not reflect the depth and breadth of issues covered by the WPS and YPS agendas, including women and youth’s meaningful participation in peace processes and political decision-making; conflict prevention and disarmament; and prevention of violent extremism. In addition, with a limited number of two to three specific actions per official Action Coalition that will be resourced, committed to, implemented, and monitored, it is likely that WPS and YPS priorities and challenges will be overlooked. The Generation Equality Global Forum cannot lead into the full realization of the gender equality agenda if peace and security issues are not accurately reflected; and women and youth peacebuilders are not able to meaningfully participate and influence how the Beijing+25 processes and outcomes are shaped.

We call on you as the Core Group Members of the Generation Equality Global Forum to designate Women and Peace and Security and Youth and Peace and Security as one of the official Action Coalitions. We stand ready to work with all stakeholders to create channels for the effective participation of women and youth peacebuilders in Beijing+25 processes.

[2] Secretary-General’s remarks to the General Assembly on his priorities for 2020, https://www.un.org/sg/en/content/sg/statement/2020-01-22/secretary-generals-remarks-the-general-assembly-his-priorities-for-2020-bilingual-delivered-scroll-down-for-all-english-version