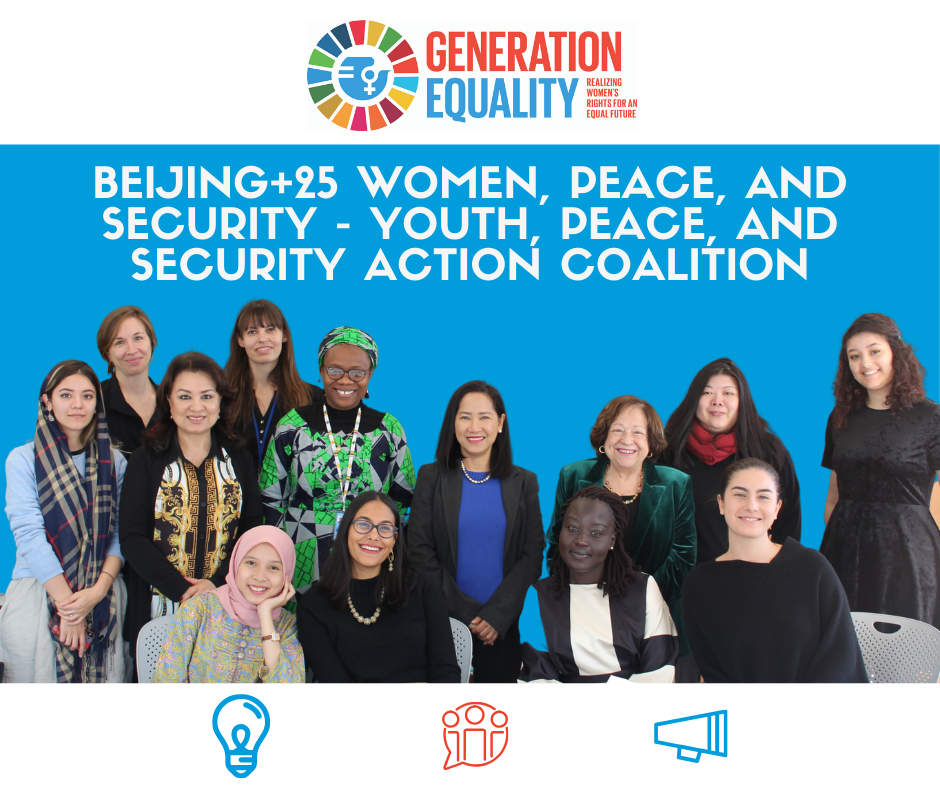 The WPS-YPS Action Coalition’s objectives are to:

1. Increase awareness of civil society organizations, in particular grassroots organizations working in conflict affected countries and territories about the Beijing Declaration and Platform for Action and the Beijing +25 process and ensure that their key messages on the WPS and YPS Agendas are reflected in all discussions on Beijing +25, including the Generation Equality Global Forum and their outcome documents;

2. Improve coordination and collaboration among civil society organizations that advocate for the effective implementation of the YPS and WPS resolutions in order to strengthen impact of advocacy with Member States, UN entities, regional organizations in the lead up to the Generation Equality Global Forum and beyond;

3. Facilitate discussions on the intersection of WPS and YPS with the other thematic focuses of the Generation Equality Forum namely, environmental conservation; protection and rehabilitation; freedom from violence; stigma and stereotypes; poverty eradication; social protection and social services; inclusive development, shared prosperity and decent work; participation, accountability and gender-responsive institutions;

4. Produce a WPS-YPS advocacy paper that strongly reflects local voices and brings together key civil society advocacy messages and asks from all sub-thematic areas of the WPS and YPS Agendas, including their intersections with the other thematic areas of the Generation Equality Global Forum; and

5. Present core messages in the WPS-YPS advocacy paper in all key events on Beijing + 25, 20th anniversary of UNSCR 1325 and 5th anniversary of UNSCR 2250; and advocate for their integration into the Beijing+25 Feminist and Women’s Movement Action Plan as well as in 2020 reports of the Secretary-General on WPS and YPS.

The 25th anniversary of the adoption of the Beijing Declaration and Platform for Action coincides with two other important anniversaries: the 20th anniversary of the landmark United Nations Security Council Resolution (UNSCR) 1325 on Women, Peace and Security (WPS); and the 5th anniversary of UNSCR 2250 on Youth, Peace and Security (YPS). WPS and YPS agendas recognize the agency and critical roles played by women and young women in conflict-resolution, conflict-prevention, prevention of sexual violence in conflict, peacebuilding, and sustaining peace. Strong synergy between the Beijing Declaration and Platform for Action and the WPS and YPS resolutions is necessary to build intersectional solidarity and galvanize global action on women’s rights, gender equality, peaceful and inclusive societies.

To join the B+25 WPS-YPS Global Coalition listserv, please fill out this form: https://forms.gle/6Z7tsyj8xe8bPneU7

The Fourth World Women’s Conference was held over a two-week period in Beijing, China in September 1995. The Conference provided a forum for thousands of delegates representing 189 countries and approximately 30,000 activists to collaborate on the most ambitious framework for the advancement of women’s rights to date. This collaborative process, which involved debate, negotiation, lobbying and networking between stakeholders resulted in the policy framework called the Beijing Platform for Action.

The Beijing Platform outlined twelve critical areas of concern for the advancement of women’s rights, which continue to be relevant today. They deal with the relationships between women and: Poverty; Education and training; Health; Violence against women; Armed Conflict; Economy; Power and decision-making; Institutional mechanisms for the advancement of women; Human rights; Media; Environment; and the girl child.