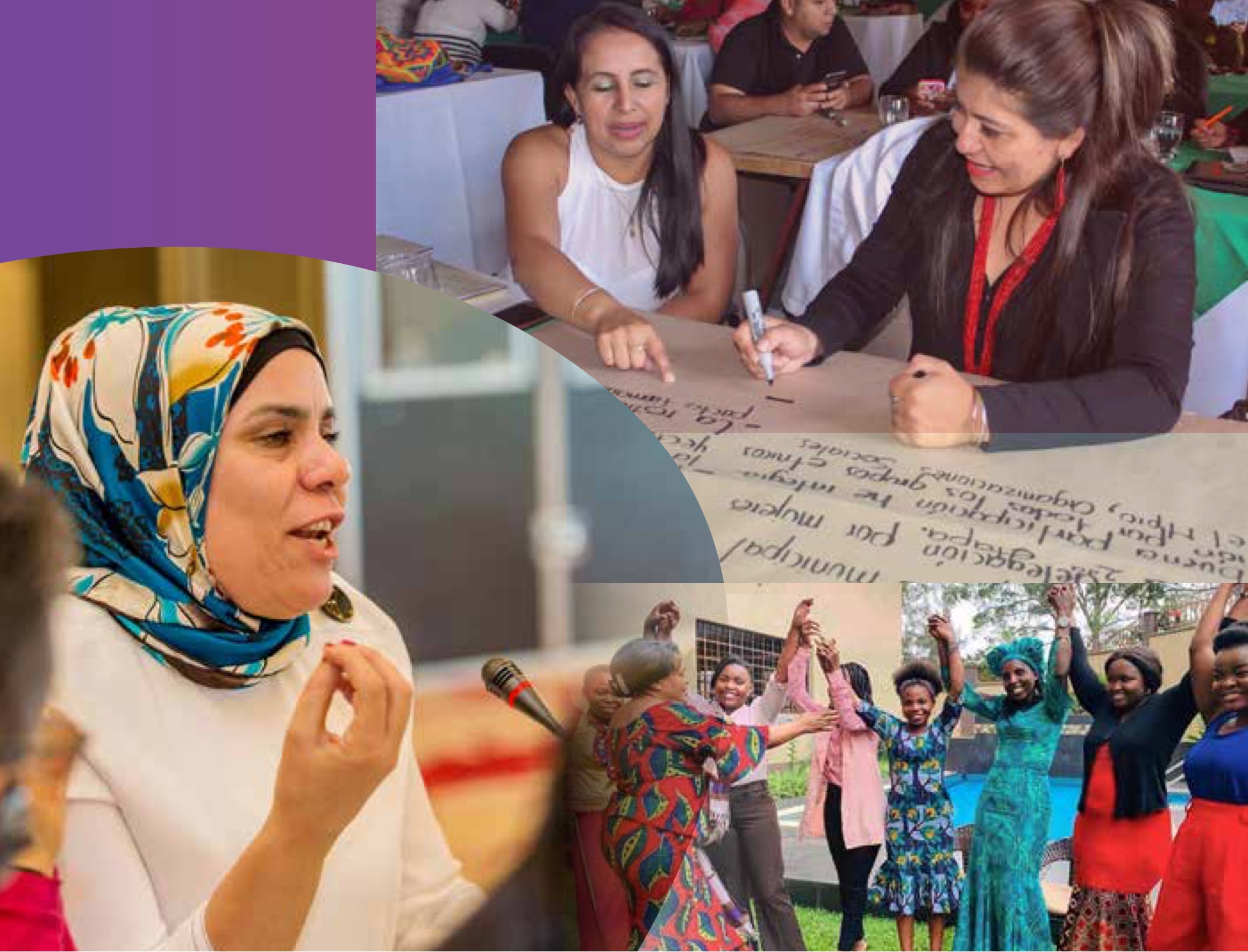 Peace from the Ground Up: A Study of What Sustaining Peace Means to Women from Local Communities and Civil Society

On 30 October 2019, GNWP has launched the full report from the global research on how what “Sustaining Peace” means to local women and civil society around the world. The research, led by GNWP with support from UN Women and in partnership with local civil society organizations and researchers, reached over 1,600 people in 50 countries through a multilingual survey, KIIs and FGDs. It provides insights and concrete recommendations on how to implement the Sustaining Peace resolutions in a way that is inclusive, gender-sensitive and locally-led.

The promise of “maintaining international peace and security” is one of the most important commitments of the United Nations (UN), and securing peace one of its most central tasks. Yet, it is also a promise that has proven to be the most elusive. Conflict and instability continue to be widespread across the world. According to the Global Peace Index, in 2018, “global peacefulness declined for the fourth straight year (…)  as a result of growing authoritarianism, unresolved conflicts in the Middle East and North Africa, and increased political instability across the world.” On the eve of the 20th anniversary of UNSCR 1325, 25th anniversary of the Beijing Platform for Action, and 75th anniversary of the United Nations, it is more important than ever to reflect on more effective ways of preventing conflict, building and sustaining peace.

The substantively identical Security Council and General Assembly resolutions on Peacebuilding and Sustaining Peace (UNSC Resolution 2282 and General Assembly Resolution 70/262) are an important step towards building a more inclusive and sustainable peace. They put forth a vision of peacebuilding that is context-specific, locally-driven and demands coherence, coordination and concerted actions across the UN system, Member States, civil society and other stakeholders. They underscored that sustaining peace should be understood as a “goal and a process to build a common vision of a society, ensuring that the needs of all segments of the population were taken into account.”  Similarly, in his January 2018 report on Peacebuilding and Sustaining Peace (A/72/707–S/2018/43), the Secretary-General noted that “[c]ommunity-level engagement by the United Nations is [a] critical component of sustaining peace.” Inclusion of local women – and local communities – in decision-making about peacebuilding is of paramount importance, and a foundation of sustainable peace. They have not only to be engaged, but to have full ownership of, and take a lead role in, peacebuilding efforts.”

Local women and civil society are the pioneers of Sustaining Peace. Their great interest and enthusiastic participation in GNWP’s research sends a clear message at this historic and critical juncture: “We want to be heard! We want to be part of the global discussions and decision-making on sustaining peace!” We are proud to be able to share this report, and hope that it will inform the commitments that will be made ahead of the 20th anniversary of UNSCR 1325 and Beijing +25 commemoration, and the ensuing interventions.

The Key Findings and Recommendations of the research are as follows:

Key Finding 1 – Peace cannot be defined merely as an absence of war or armed conflict. To women’s civil society around the world, human security, sustainable development, responsible natural resource management, good governance and a harmonious community relying on non-violent conflict resolution are the foundation of peace.

Key Finding 2 – The Sustaining Peace agenda should focus on long-term changes, such as supporting inclusive and accountable institutions; challenging militarized response to conflict and fostering a “culture of peace”; implementing sustainable development programs; and guaranteeing access to education and employment.

Key Finding 3 – There has been some progress in the inclusion of women in both formal and informal peace processes. However, women remain excluded many peace processes. Moreover, there is still a need to ensure that the inclusion extends to all women – especially the youth, women with disabilities, indigenous women, refugees, internally displaced, and other marginalized groups – are fully included, and that their roles go beyond being observers or advisors to being key influencers and co-decision-makers.

Key Finding 4 – Patriarchal culture and societal practices, the political and economic exclusion of women, low levels of education and awareness, and the lack of resources and poverty prevent women from participating in peace processes and decision-making. To address these challenges, it is necessary to create enabling conditions and platforms for grassroots women’s effective participation.

Key Finding 6 – Despite the challenges they face, women are active in building and sustaining peace at national and local levels. When they participate in the implementation of peace agreements, they help ensure that implementation is effective and that it benefits everyone. Where there are no peace agreements, women work at the grassroots level to advocate for peace, as well as to deliver relief, promote sustainable development and address root causes of conflict, such as climate change and gender inequality.

1. Recognizing that peace is more than the absence of war, the UN, Member States and civil society should ensure that Sustaining Peace initiatives focus on long-term goals, such as: strengthening state institutions; fostering a culture of peace and non-violent conflict resolution; promoting access to social services, including health and education; and providing economic empowerment and employment opportunities. This requires strengthening the nexus between peace and security efforts, in particular between the WPS agenda, and development and humanitarian action. (See Key Findings 1 and 2)

2. The UN should put pressure on governments to ensure women’s meaningful participation in formal peace negotiations, crafting and implementation of peace agreements and political transitions, and ensure that women civil society and women of diverse backgrounds are fairly represented. (See Key Findings 3 and 4)

3. The UN and Member States should ensure women’s meaningful participation in formal peace negotiations, the crafting and implementation of peace agreements and political transitions, and ensure that women’s civil society and women of diverse backgrounds are fairly represented. (See Key Findings 3 and 4)

4. Member States should stop the use of violence and military interventions as a means of resolving conflicts. They should also ensure that they do not contribute to illicit trafficking in arms and instead support non-violent, civil society-led initiatives in conflict resolution and prevention. (See Key Finding 1)

5. The UN and civil society should monitor and hold governments accountable for the inclusive implementation of peace agreements as well as other laws and policies related to gender equality and peace and security, including the WPS Resolutions and the Convention on the Elimination of all forms of Discrimination Against Women (CEDAW) and Sustainable Development Goals, in particular Goal 5 and Goal 16. (See Key Finding 5)

6. The UN and Member States should ensure that women, especially youth, women of all abilities, indigenous women, refugees, internally displaced, and other marginalized groups, are fully included at all stages of the implementation of peace agreements, as well as in all building and sustaining peace and conflict prevention initiatives. They should guarantee that women’s voices are heard, and that their contributions are recognized and supported. This entails making sure that gender-sensitive provisions and language proposed by women are included in the final peace agreement and not removed in the course of negotiations. Civil society should monitor and hold the UN and Member States to account on this matter. (See Key Findings 3 and 7)

7. Civil society from countries that have not experienced armed conflict in recent history should organize experience-sharing exchanges with local and grassroots civil society in conflict-affected and post-conflict countries, to enhance solidarity, build capacity, and develop joint advocacy strategies for Sustaining Peace. (See Key Findings 4 and 5)

8. The UN, Member States and the donor community should support the meaningful participation of women from diverse backgrounds and sectors in the implementation of peace agreements after they are signed. It is equally, if not more, important to ensure that women co-lead the implementation of peace agreements. The donor community should also eliminate socio-cultural and institutional barriers to women’s participation including gender norms, lack of resources and lack of clear mechanisms for implementation. (See Key Findings 5 and 6)

9. The donor community should increase funding for peacebuilding, conflict prevention and Sustaining Peace, especially for initiatives led by women’s civil society, and make sure this funding is long-term and predictable. Such funding should also be made flexible and accessible to local organizations, and be available at all stages of Sustaining Peace: before, during and after conflict. Women should have access and opportunities to shape donor priorities – including through their meaningful participation in donor conferences. (See Key Finding 7)