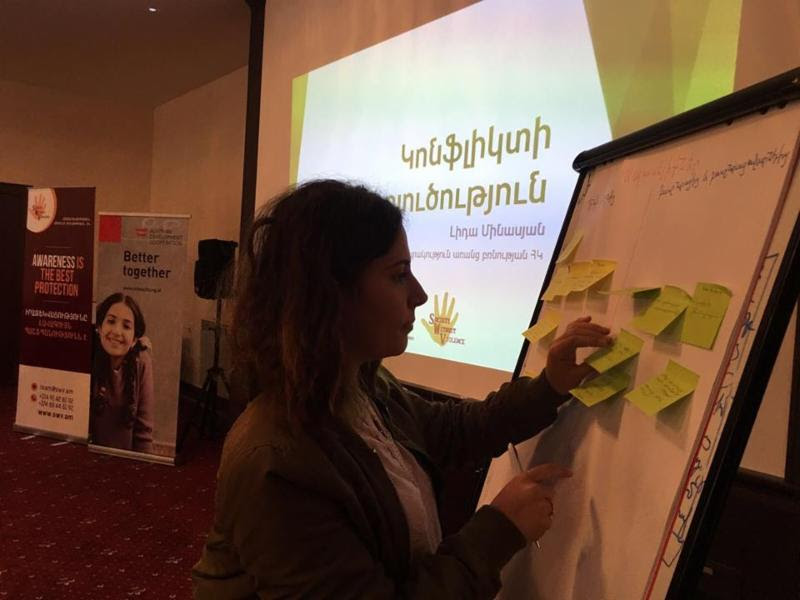 Armenian media discuss their role in advancing the Women, Peace and Security Agenda

Aghveran, Armenia – “The role of the media is to dismantle stereotypes about armed conflicts, such as the one in Nagorno-Karabakh,” states Ann Mkrchtyan, Journalist from Journalist.am during the workshop on Media and the United Nations Security Council Resolution 1325 on Women, Peace, and Security in Aghveran, Armenia on September 9-10. Two seats down, a contesting view is offered, “No, the media’s role is solely to objectively report and relay messages from official sources.” This was one of the discussions participated in by writers, television and radio broadcasters and bloggers from various media organizations in Armenia.

The ongoing conflict with Azerbaijan over Nagorno-Karabakh, characterized by recurring exchanges of fire between Armenian and Azerbaijani troops—including the four day war in April 2016—illustrates the fragility of the political situation in these two countries. It is also one of the topics that Armenian media covers regularly. The Global Network of Women Peacebuilders (GNWP) and Society Without Violence – Armenia (SWV) with support from the Austrian Development Agency (ADA) is facilitating the workshop with Armenian media practitioners to examine their coverage of conflict, the impact of the conflict on women and their role in peacebuilding.

The workshop, comprised of innovative presentations, discussions and group work, also aims to raise the participants’ awareness of Resolution 1325 and the supporting resolutions on women and peace and security. The workshop participants will produce a media and communication strategy to raise broad awareness and promote effective implementation of the resolutions in Armenia. The workshop also stresses the important complementary role of the UN and regional organizations, such as OSCE, to implement the resolutions and support the adoption of National Action Plans.

The Media and the Resolution 1325 workshop in Armenia is the first of a series of four workshops in partner countries of the Organization for Security and Co-operation in Europe (OSCE)—Armenia, Georgia, Moldova and Ukraine—which are affected by conflict and political instability in varying degrees. It is part of a bigger project that seeks to collaborate with national and local government, civil society leaders, internally displaced people, marginalized groups, regional organizations, the UN and other actors, to promote local and national ownership and participation in the implementation of the women and peace and security resolutions in the OSCE countries.

Ms. Dulcie Leimbach, former New York Times editor and current editor and publisher of PassBlue, an online publication that focuses on women, peace operations, and the United Nations, spoke about the international media environment; how it impacts on national press and how it portrays women. When discussing the different forms of reporting of a conflict, she emphasized the importance of looking at all sides. “A journalist cannot solve a conflict, especially not a complicated military conflict such as Nagorno-Karabakh, but a journalist can report on the different perspectives on how to achieve peace—from authorities, experts in the field, the armies, women and girls, every day citizens, and anyone involved, this will ultimately inform and educate the public and lead to peace talks,” she explained.

Ms. Mavic Cabrera-Balleza, GNWP’s CEO and International Coordinator, emphasized the role of the media in the implementation of the WPS resolutions during her openingremarks. “A fundamental step in effective policy develoment and implementation is awareness raising. A well-infomed public is more likely to participate in policy discussion, decision-making and implementation than those who do not know the issues and the policies that address them. There is no better partner in this work than the media,” she stressed.