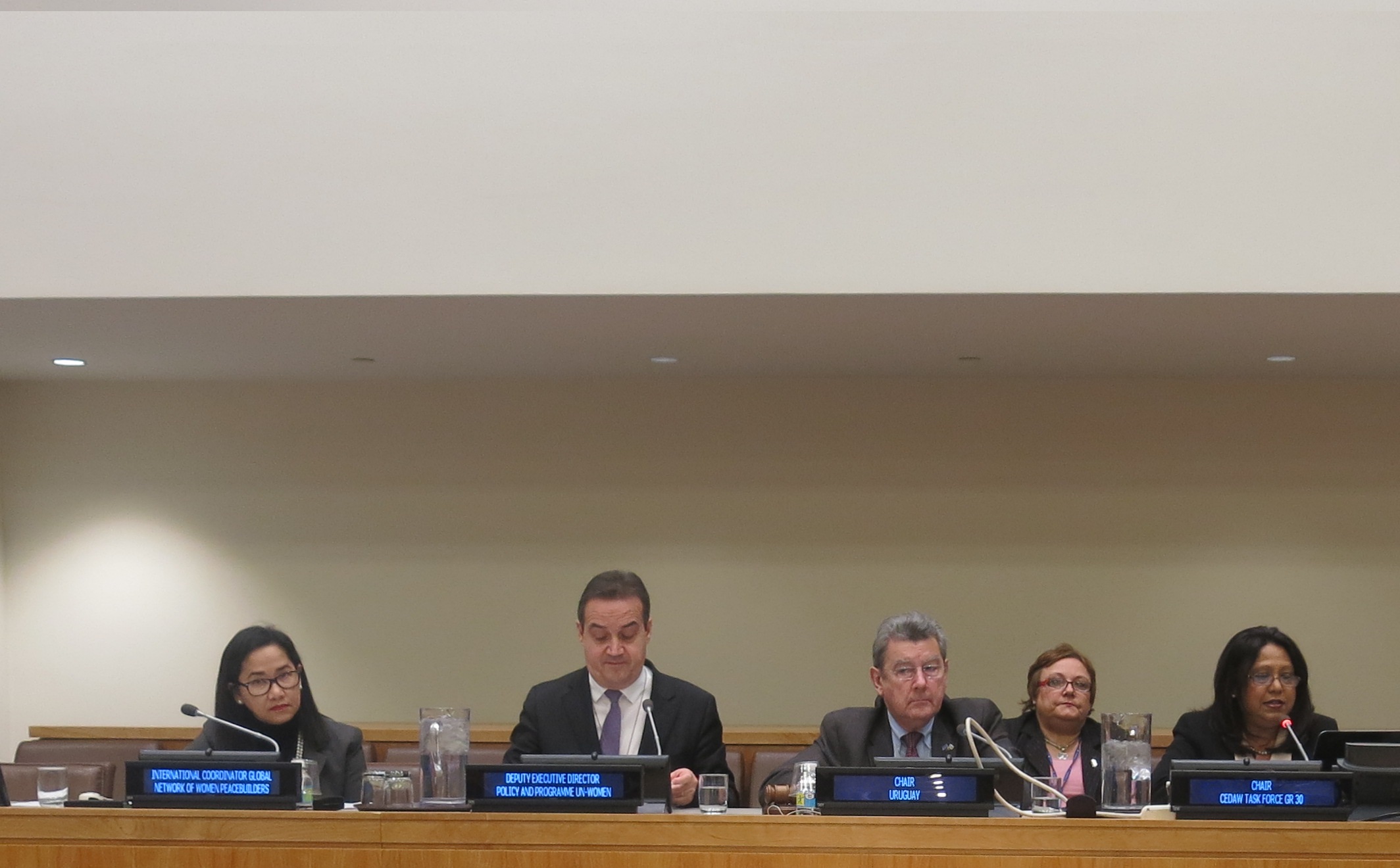 Historic Arria Formula Meeting on the Synergies between CEDAW and  the Women, Peace and Security  Resolutions

On December 5th, 2016, the Permanent Mission of Uruguay to the UN in collaboration with the Global Network of Women Peacebuilders and the Permanent Mission of Switzerland to the UN and with support from the Federal Department of Foreign Affairs (FDFA) Directorate for International Law organized the Arria Formula Meeting on the “Synergies between SC Resolutions on Women Peace and Security and CEDAW” at the UN Headquarters in New York..

The meeting highlighted the importance of the Convention on the Elimination of All Forms of Discrimination Against Women, particularly its General Recommendation (GR) No. 30 on women in conflict prevention, conflict and post-conflict situations as a strong complementary accountability mechanism to the WPS Resolutions.

Some of the recommendations from the Arria Formula meeting were that Security Council Members should use CEDAW as a mechanism for gathering information since the CEDAW Committee has the ability to compile information on women, peace and security issues from States Parties, civil society and UN country teams. This country specific information can then be shared with the Security Council through meetings like the Arria Formula or open debates. By bringing CEDAW and other treaty bodies to collaborate with the Security Council Member States, the monitoring and implementation of UNSCR 1325 and other related WPS resolutions can be more effective. There was also a call for the CEDAW Committee and the Special Representative on Sexual Violence in Conflict to work together given the important work that the CEDAW does in addressing all forms of sexual and gender based violence against women and girls.

The Arria Formula meeting was a response to the recommendation from the 2015 Global Study on UNSCR 1325 to pursue avenues to strengthen interaction and information flows across the entire UN system, and address the fragmentation and silos that hamper effective response. It was also an advocacy method to push for the work in unison between the UN and body treaties and to forgo the silos and fragmentation structure that has been detrimental to the implementation of WPS resolutions.

The transcripts of the speeches made by the Chair of CEDAW Task Force on GR 30, Ms. Pramila Patten, UN Women’s Deputy Director for Policy and Programme, Mr. Yannick Glemarec and GNWP’s International Coordinator, Ms. Mavic Cabrera Balleza, can be found below:
Arria Formula on CEDAW and the WPS resolutions -Dec. 5, 2016 – Pramila Patten’s paper

Since its adoption in October 2013, CEDAW General Recommendation No. 30 (GR 30) on women in conflict prevention, conflict and post-conflict situations has been providing authoritative guidance to State parties on measures to ensure the protection, respect and fulfillment of women’s human rights before, during and after conflict. GR 30 also serves as a strong complementary reporting and accountability mechanism to UN Security Council resolution (UNSCR) 1325 (2000) and the supporting resolutions on women, peace and security (WPS). Among its many important provisions, GR 30 recommends that States parties “[e]nsure that National Action Plans and strategies to implement Security Council resolution 1325 (2000) and subsequent resolutions are compliant with the Convention, and that adequate budgets are allocated for their implementation.” It also calls for enhanced collaboration with civil society organizations working on the advancement of the WPS agenda. The 189 UN Members States (out of 193) that ratified CEDAW are now compelled to report on the implementation of the WPS resolutions in their periodic reports to the CEDAW Committee.

Since GR 30 was adopted, the Global Network of Women Peacebuilders (GNW) has highlighted the importance of developing practical tools to guide Member States and civil society on how to use GR 30 and USNCR 1325 complementarily to push forward the WPS agenda. The development of practical tools, such as guidebooks and case studies on the use of GR 30, was also among the recommendations discussed during a training on GR 30 held in Indonesia in December 2014, organized by GNWP in partnership with the CEDAW Task Force on GR 30, the Asian Muslim Network, and the Asia-Pacific Women’s Alliance on Peace and Security.

In 2015, the GNWP International Coordinating provided comprehensive comments to a civil society guidebook drafted by the International Womens’ Rights Action Watch-Asia Pacific (IWRAW-AP). GNWP also shared two detailed reports on the use of GR 30 as an accountability mechanism to the WPS resolution in Iraq and Sierra Leone (57th session) and Syria and India (58th session) with IWRAW AP and UN Women consultants working on producing a CEDAW/WPS Guidebook. In October 2015, the UN Women Guidebook on CEDAW general recommendation no. 30 and the UN Security Council resolutions on women, peace, and security was launched during an event co-sponsored by GNWP.

To complement the UN Women Guidebook as well as the work of IWRAW-AP, GNWP has produced case studies on the use of GR 30 by civil society since its adoption in four countries: Azerbaijan, Colombia, India and Iraq. These case studies provide:

Country-specific information on the last periodic report to the CEDAW Committee;

Concrete examples of the use of GR 30 by civil society and its impact on pushing forward the WPS agenda at local, national, regional and global levels

Challenges encountered by civil society in their use of GR 30

Recommendations to the CEDAW Committee, civil society, national governments and the international community regarding the use of GR 30 as a complementary mechanism to UNSCR 1325.

Executive Summaries of the four case studies will be distributed during the Arria formula meeting convened on December 5, 2016 by the Permanent Mission of Uruguay to the UN. During this Arria Formula meeting, CEDAW experts, Security Council Members and other Member States will exchange views on how UNSCRs on WPS and GR 30 are mutually reinforcing. The Arria formula is intended to enhance the effectiveness of the Security Council Framework on 1325 by reporting to CEDAW on the implementation of UNSCR 1325 and the supporting WPS resolutions. It also aims to generate support for a more integrative approach to the implementation of international laws and policies across the UN system.

The Azerbaijan, Colombia, India and Iraq Executive Summaries and Case Studies can be accessed here.

If you belong to a civil society organization and are interested in drafting or contributing to a Case Study on the complementary use of GR 30 and UNSCR 1325 in your country, please contact Kelly Yzique at kelly.gnwp@gmail.com.