Maria Cristina Giron is a local official from Popayan that works to integrate UNSCR 1325 via the GNWP’s Localization programs in order to ensure that local municipalities and civil society organizations work together to achieve the objectives of UNSCR 1325 and 1820.

See below for full video: 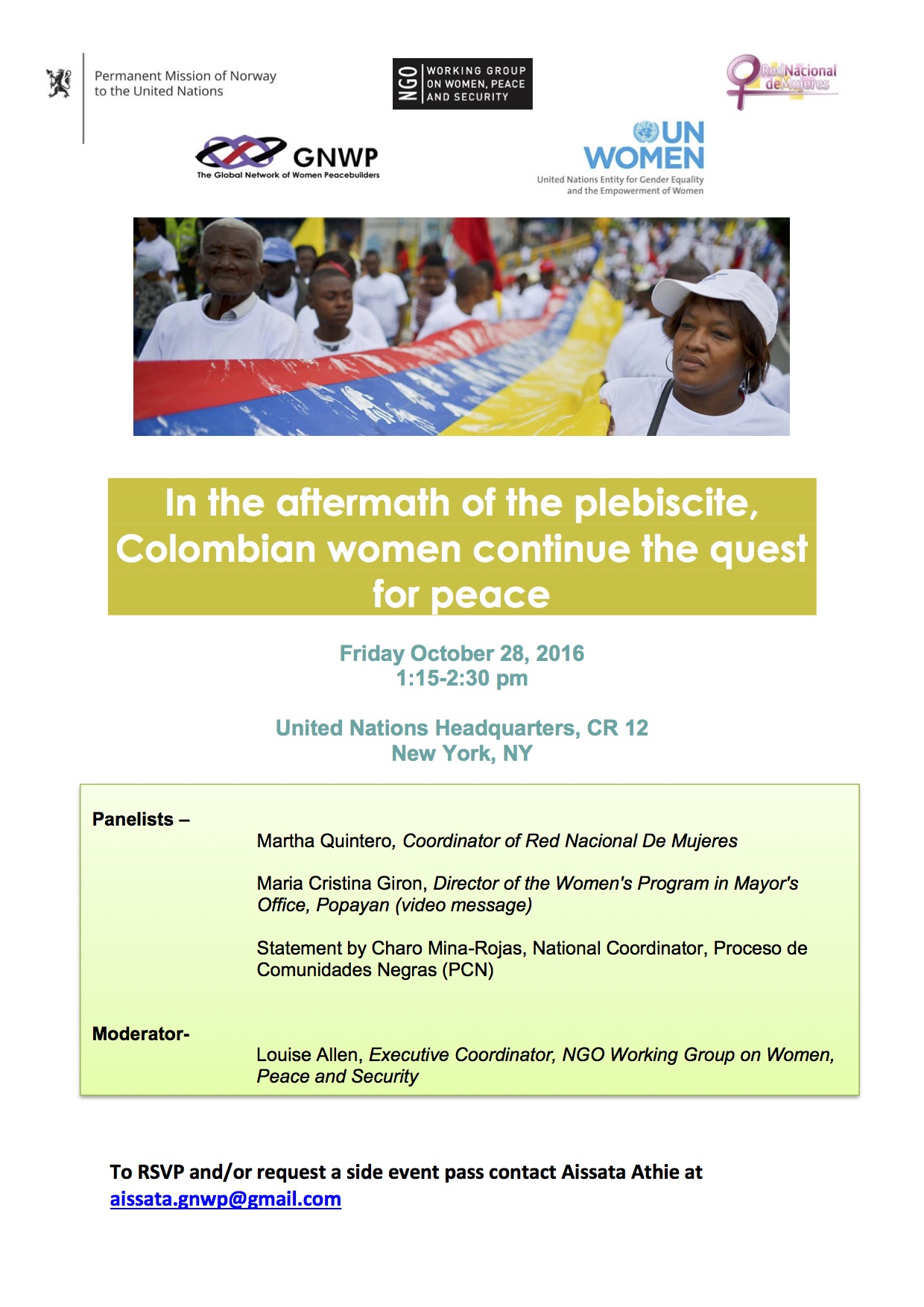 In the aftermath of the plebiscite, Colombian women continue the quest for peace

RSVP or request a pass: contact Aissata Athie at aissata.gnwp@gmail.com

“The GNWP promotes something very important to the prevention of violent escalation and to peacebuilding, namely women’s participation. Only when women’s voices and perspectives are heard in peace negotiations and peacebuilding processes, a peace agreement can lead to genuine e-existence and reconciliation. Therefore, the UNSCR resolution 1325 is of immense importance, but only if it is implemented. Here GNWP is doing a very efficient work at the UN, and especially with the focus at national and local levels, translating international policies of women, peace and security to positive, realistic actions in the local communities, where people who have suffered in wars are hoping for a secure and dignified future.  GNWP’s contribution’s I Colombia and South Sudan is strongly appreciated.”

Candidates to the Livia Foundation Award are identified through recommendations from professional conflict resolution environments.

GNWP is humbled by this recognition and extends their thanks to LIVIA Foundation and its members. 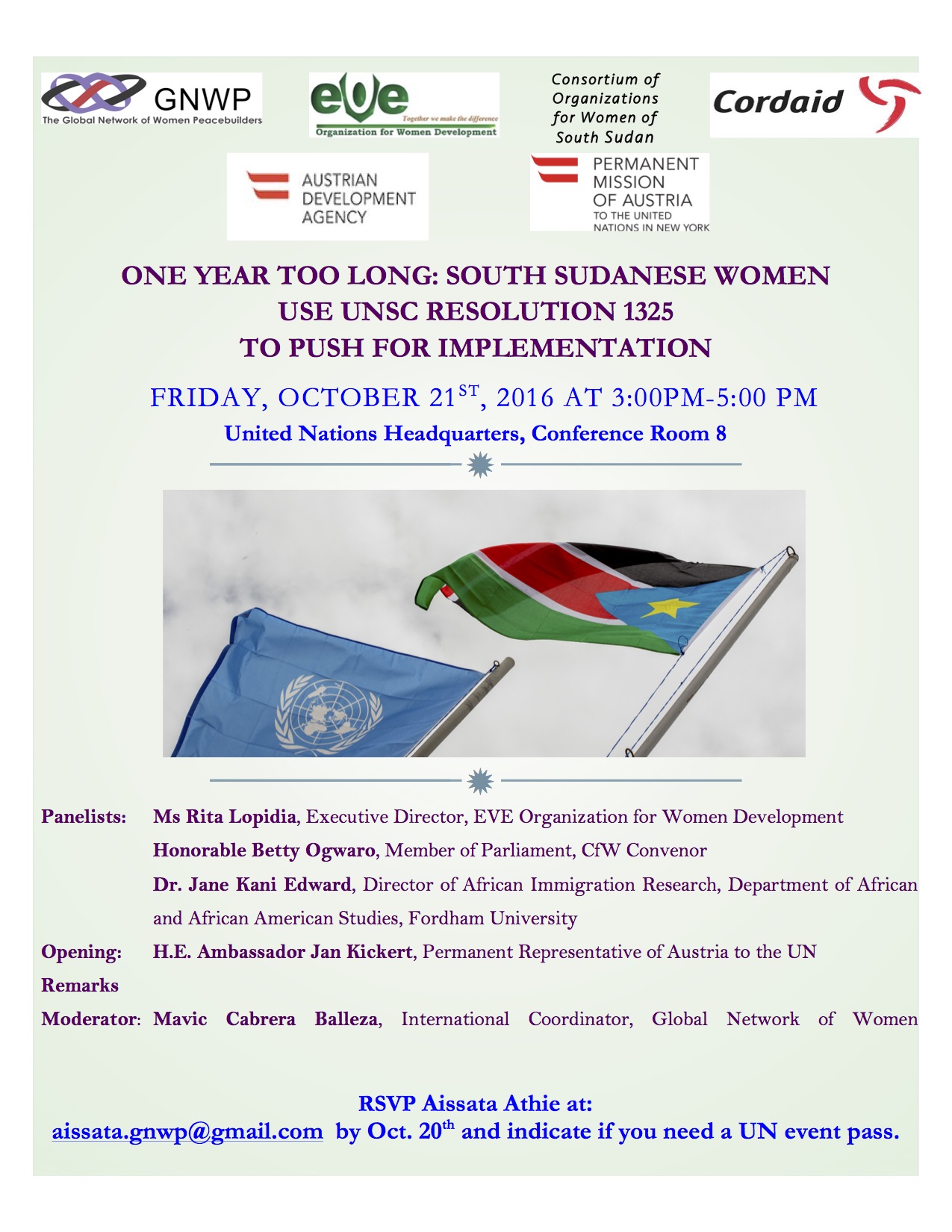 This event will examine the most recent political developments and the violations of the peace agreement in South Sudan. It will also discuss the implications of the UN Security Council Resolution (UNSCR) 2304, the creation of a Regional Protection Force; the call for an arms embargo; and how South Sudan’s National Action Plan on UNSCR 1325 on Women, Peace and Security can be used as an effective instrument towards the implementation of the peace agreement. In addition, the panel will present the outcomes of the recent Peace Dialogue on South Sudan.

RSVP Aissata Athie at: aissata.gnwp@gmail.com
on or before October 20th and indicate if you need a UN event pass.

One year too long: South Sudanese women use UNSC Resolution 1325 to push for implementation of the peace agreement – A panel discussion

The renewed fighting in South Sudan on July 8, 2016 between the Sudan People’s Liberation Army (SPLA) government forces and the Sudan People’s Liberation Movement – In Opposition (SPLM/IO) forces during a Presidential meeting in Juba, has alerted the world once again on the fragility of the situation in this country. The violence has since continued. More deaths, sexual violence, displacement and human rights violations have also been reported. Amidst the violence, the government dismissed the appointed 1st Vice President and replaced him with another from the SPLM/IO. It is feared that this might lead to more fighting in South Sudan as it has already led to divisions in the SPLM/IO camp.

In response to the situation, the Global Network of Women Peacebuilders (GNWP), Eve Organization for Women Development and the Consortium of Organizations for Women of South Sudan (CfW) convened South Sudanese women’s groups, civil society, government officials, religious leaders, representatives of IGAD, UN women and foreign embassies in a Peace Dialogue on South Sudan in Nairobi, Kenya on October 3-4, 2016. The dialogue discussed the national situation and the various efforts in promoting peace and stability in the country. The participants also discussed the obstacles to the implementation of the Agreement on the Resolution of Conflict in South Sudan signed in August 2015.

As follow up, a panel discussion on the current situation in South Sudan and the outcomes of the Peace dialogue will be held on Friday, October 21, 2016 from 2016; 3:00-5:00 pm at the UN Headquarters, Conference Room 8. The panel will also elaborate on the implications of the UN Security Council Resolution (UNSCR) 2304, the creation of a Regional Protection Force; the call for an arms embargo; and how South Sudan’s National Action Plan on UNSCR 1325 on Women, Peace and Security can be used as an effective instrument towards the implementation of the peace agreement.

The panel discussion is being organized by GNWP, Eve Organization, CfW, the Permanent Mission of Austria to the UN and the Austrian Development Cooperation.

RSVP Aissata Athie at: aissata.gnwp@gmail.com
on or before October 20th and indicate if you need a UN event pass.